Book Review: Born in the GDR: Life in the Shadow of the Wall 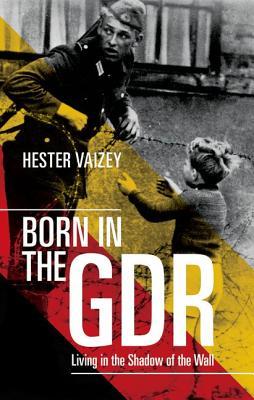 Born in the GDR: Life in the Shadow of the Wall by Hester Vaizey is a study of eight former East Germans and their experience once the wall fell. Vaizey earned her BA, M. Phil., and PhD from Sidney Sussex College, Cambridge. She is Director of Studies in History for Prelim and Part I students along with being a lecturer in Modern German history.

As an American and Marine veteran of the Cold War, when the wall fell there was a feeling of “It’s all over.” We had one and in the military we wondered what would happen next? We were focused on the Soviet threat and the threat from their allies and supported groups; we had nothing to focus on now. We won but victory really was not that satisfying. We were left thinking what will happen to us now that there is no enemy. The scenes of the wall being torn down and later the Soviet flag being lowered for the last time and a free Russian flag being raised over the Kremlin were the signs of joyful victory. The people of Eastern Europe are free and free to enjoy prosperity under capitalism.

East Germany was probably the best developed and had the highest standard of living in the Eastern Block. I while in Germany, I purchased Praktica camera and an Original Richter compass set. They were quality products at a very cheap price. I would have expected the fall of communism in East Germany would have held to a rapid and euphoric reunification. What could be more natural than freedom and consumerism?

Vaizey interviews and examines eight people’s experiences before and after the wall came down. The ranges of experience cover the spectrum emotions and expectations. Freedom was welcomed by some, particularly if they were political prisoners. Others took a more moderate approach and viewed freedoms as good but were puzzled by mass consumerism in the West. Why do you need to take part in a rat race just to make money and acquire things you do not need? Some welcomed change but worried about losing their voice and identity as East Germans. These several people only knew life in East Germany. It was the system they were born into and raised in. Rapid reunification seemed more like an invasion by the West rather than a coming together.

Two major ideas that are brought out in this book first is the meaning and freedom. If you are raised in a system that took care of you from cradle to grave and suddenly you are told that you are free. You wonder “Free from what?” There is now starvation, unemployment, and homelessness. Second is the information used. Usually, history is researching documents and recorded materials, without the ability to question the original authors of their meaning and intent. For example, the United States Constitution is a document that the original meanings are still being debated two hundred and twenty five years later. Original source material from interviews allows you to question the person’s intentions and meanings and can lead to a more accurate recording of history. But, care must be taken with a small sample. Many people are driven by emotion. If they fared well under reunification, then it was good. If they suffered or lost something of value under reunification it was was not a good choice.

As time moves on my guess is most people will accept East German absorption into West Germany as a logical move. Human memory tends to be short and as long as the German economy does not crash, there will be very few people long for the good day of the Stasi. Last year I talked to a person I met from Russia who was in his mid twenties. I said it was nice to talk (heavy use of Google translator), because when I was your age we could never have had a conversation. He said, “Yes, no internet.” I said no because of communism and the Cold War. He laughed and said no thinks of communism anymore. For people his age, it is like it never happened.

After starting this book I thought it was really well done and interesting, but a bit dated. About half way through the book I reconsidered the dated part. There are lessons to be learned here. Not necessarily about reunification, such as the unlikely event of North and South Korea becoming a single country but of the Western, perhaps more American concept of freedom. In America we like to think of ourselves as liberators granting freedom of repressed people around the word. Afghanistan and Iraq were liberated and Libya and Egypt too. America has this belief that “liberating” nations brings happiness. Vaizey, whether intentional or not, sets the reader up to look at the world through the eyes of people who were liberated, and see what their expectations were and even if they wanted to be liberated. Freedom means different things to different people. Some people want freedom from homelessness. Some people want consumerism. Some just want reform. Some want to keep their culture. There is no standard definition. Born in the GDR is an excellent living history with plenty of contemporary world lessons to be learned. A small snapshot of East Germany made for a worldwide lesson.