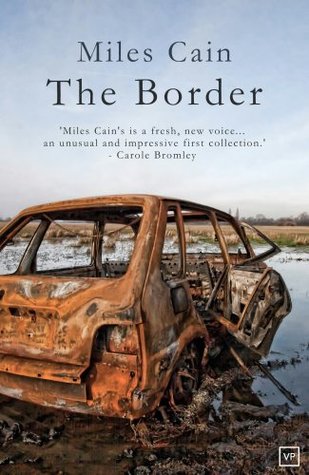 When I first saw this book I assumed it was about the Southwest by the title and the cover art. However, Cain resides and writes about England. He is the second British poet that I have recently read. Helen Mort is the other. I have been very impressed with the new poetry coming out of Britain.

The poem that absolutely floored me was called “1977”, part of which goes:

At the club, Vicious posed
and Rotten leaned.
The crowd baptised itself
with spit and noise,

proved itself with elbows,
wiped the carnage from its eyes.
Everything we wanted
pulsed inside music or skin.

Afterwards, stumbling into the dull
night, we felt the racket leave us.
We didn’t mention the future,
and none of us asked to grow old.

That pretty much summed up how many of us felt, back in the day. I was so impressed I voiced messaged that passage to a friend, and even with my stoic and monotone voice, it sounded good. There is life in Cain’s words.

Cain manages to capture many thoughts and ideas and reflects a different light on many seemingly common ideas. “One Night I Dreamt I was God” gives a deist twist and presents the frustration of being a supreme being. “Shouting Down the Moon” presents frustration of the rut we all fall into from time to time.

Sour day. Job lost. Four pints
dropped to a crater of stomach;
I sprayed my borrowed confidence on a damp wall.
Slalomed streets to my door,
dropped my keys. Swore at my shoes.

Frustration and alcohol find their outlet in cursing the moon, but with a grace that makes the argument seem reasonable.

The topics vary but many have that late 1970s feeling of depression and loss. This feeling is carried into the present with poems like “His Family Have Been Informed.” Here an officer and a sergeant arrive at a home to inform a woman she is now a widow. The son is playing war and asks the uniformed sergeant, “Do you know my dad?” “Lessons” carries a message of loss too:

You never made 22, and your flippant exit
sent tears shivering over my chest.

There is an outsider feeling to many of the poems like “The Man Who Lived In Shadows.” It’s that punk feeling of being outside of society and not wanting to be a small cog in a big machine. It is fueled on the feelings of an era that those of us in the mid-1970s felt. The peace, love, and togetherness of the 1960s died along with many things that we believed in. In America it was Vietnam, Watergate, stagflation, unemployment. There was a resistance in the shadows and underground here and in Britain too. The Sex Pistols in England and the Ramones, Patti Smith, Lou Reed, The New York Dolls, and others in America spoke out, if for nothing more than to shock the system.

“We didn’t mention the future,” because we didn’t think there was going to be one. Cain manages to capture that era and reshape it to the modern times. The collection is not all dark and dreary, like everything there is some light. However, even the dark and dreary come alive with Cain’s words.

I borrowed this book and am going to buy it now. Poems like “His Family Have Been Informed” grow in emotion with each rereading. It was difficult to re-read that poem when using it in this review. Cain succeeds with this collection; He masters emotions with words.