Book Review: The Assassination of Europe 1918-1942: A Political History 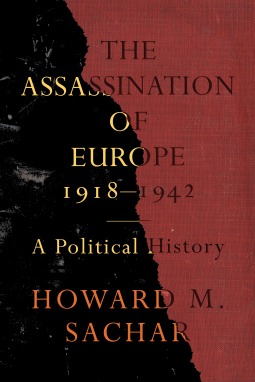 The Assassination of Europe 1918-1942: A Political History by Howard M Sachar is a history of the Interwar Period in Europe. He earned both his masters and PhD from Harvard and was a professor at Georgetown University for forty years. This is Sachar’s seventeenth book on history and political history.

As with a few other people who picked this book up, I was expecting a book on political assassinations. As I started reading the book the assassinations were of leftists and communists. Drawing on the simple black and red cover I thought it was about the anarchist and communist movements in Western Europe. Indeed, post WWI Europe was a dangerous place to be promoting Communism. Then the assassination of Ernst Rohm ended that train of thought. Then there was Trotsky death by Stalin’s order.

The book does center around political assassinations in Europe, but it is more than just that. The peace at the end of the war was going to bring democracy, an end to continental empires, and homelands for the minority populations. The League of Nations was going to ensure peace. The world was going to be entering a new era of peace and prosperity. Those grand ideas did not last. France plundered Germany for war reparations. Fascists rose and took over Italy under Mussolini. Democracies feared leftists and communists. Anti Semitism grew, not just in Germany but also France, Eastern Europe and Russia. Eastern European Jews fled their home countries after WWI and moved West. The influx of Jewish immigrants was seen by many as something to fear. That hatred became a leader in Germany.

In the Soviet Union there is political assassination and the rise and fall of Trotsky. Stalin and his mass political killings. Vichy France and the German collaborators were another blow to democracy and political freedom. Sachar uses individual assassinations to set the stage for a greater assassination: That of a continent. The assassination of Europe was more than just the death of individuals but of the nations and peoples.

The Assassination of Europe is the death of the hope of liberal democracies, peace, and prosperity that men dreamed of after the carnage of WWI. Sachar gives an in depth look in to the undoing of the Europe people wanted. The Great War was not enough to change the governments and selfishness of men. One on one political killing was only the symptom the much bigger problem. An excellent and very scholarly look into the politics of the interwar years.