Book Review: Another Side of Bob Dylan: A Personal History on the Road and off the Tracks 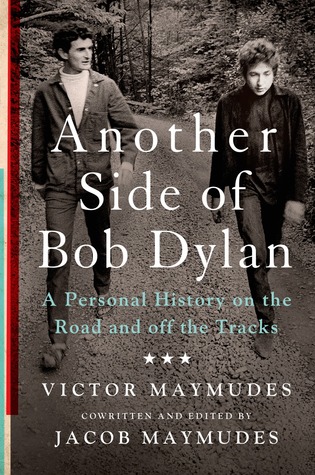 Another Side of Bob Dylan: A Personal History on the Road and off the Tracks voice recorded by Victor Maymudes and edited and written by Jacob Maymudes.

Victor Maymudes was Bob Dylan’s tour manager for many years and according to Victor a close friend. Jacob is Victor’s son and discovered the audio tapes that this book is based on after a fire destroyed Linda’s, Victor’s mother, home. The house contained many of Victor’s relics from his life on the road. The tapes, however, were in the possession of Jacob’s sister.

The book opens with a sad picture of Victor Maymudes’ ashes (he died in 2001) in the ashes of Linda’s house. Jacob tells of the difficulty and hardship of writing this book and listening to his father’s voice after his death. He laments that his father is been written out of any official Bob Dylan histories. There is a build up that this will be a very touching and personal story.

Victor Maymudes opened the Unicorn Coffee Shop for the beatniks and proto-hippies to hang out at. A clever and successful idea to give this large group of people a place to hang out. Through friends he meets Bob Dylan, and here is when the reader thinks this is going to turn into a Bob Dylan biography. It does for a short time, but quickly turns into a biography about Victor Maymudes. Much of Victor’s stories are about what he did, how smart he was, and what others did wrong. I also realized that there may be some credibility issues with the original author. He smoked massive amounts of marijuana and carried a vial of LSD noting that he shared, but not everyone was up to taking LSD daily like he was. Drugs in rock and roll are pretty common place and still Keith Richards and Gregg Allman wrote coherent autobiographies.

I lost faith in the storytelling early one when Victor tells how he introduced the Beatles to marijuana and told John Lennon to stay away from the pharmaceuticals he was prescribed because they just hid the symptoms. Although nothing else seems to reach that peak of improbability in the book, there is nothing that really restores any credibility. A search on the internet reveals little on Victor Maymudes. His Wikipedia page reads like a book jacket summary and at the bottom of the page is a link to Jacob’s unsuccessful Kickstarter page for this project, but titled Victor Maymudes: Biography. Other links are to this book. It is impossible for the reader to fact check many events.

The title of the book is misleading. It is a Victor Maymudes’ biography. Although he was a friend, possibly a close friend of Bob Dylan, there is not enough connection to consider this book a Dylan biography. Patti Smith had a starring role in her biography of Robert Mapplethorpe, but many people bought the book because of her role and writing. The same cannot be said for Another Side. Victor Maymudes does with this book what he does throughout his life: promote Victor Maymudes. I do feel terrible for Jacob Maymudes for the loss of his father and the conditions of losing him. Jacob seems to be a devoted son and held his father in high esteem. I, however, cannot buy into the book. Sorry.