Book Review: Special Deluxe: A Memoir of Life and Cars

Special Deluxe: A Memoir of Life and Cars by Neil Young 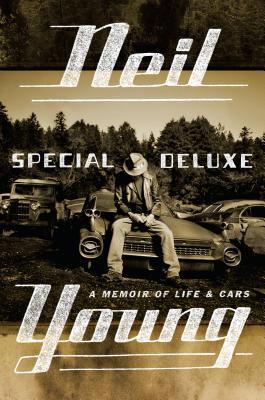 Anyone who knows me, knows I have a strong dislike for cars. It is not the car but more so the worship of the car. People playout their lives on around cars. Who is driving? Where can we park? How much is parking? How much is gas? We also design our cities and suburbs around cars. Newer housing developments don’t have sidewalks, merely a concrete path from the front door to the curb where you park your car. The corner store and the idea of a self contained neighborhood have disappeared and been replaced by large shopping centers, big box stores, and strip malls. Supporting public transportation is seen as a subsidy, while tearing up tree lined boulevards to add lanes is seen as an investment. So, I was a bit hesitant to pick up this book.

I know Neil Young’s greatest hits and Live Rust from high school where certain crowds would agree with Neil Young’s phrase “It is better to burn out than to rust.” and also quote “Homegrown.” I still know the lyrics to that one. My previous knowledge of his life was fairly limited. Neil Young was a marijuana guy and like Patti Smith found it helped release their creativity. No heroin because the idea is to create and not block or escape life. It’s a cliche, but one I give little argument. In the book Young does mention a copious amount of marijuana smoking, some drinking, and cocaine a few times. He is no Keith Richards in that sense.

Young can tell a story and this storytelling is folksy and personal. He captures a level that the reader feels is almost one on one. It’s like meeting a friend you haven’t seen in thirty years and catching up. Some stories are funny, others are about his career, and some are touching. Compared to some of the other rock star autobiographies I have read Young comes up one top. His stories seem to be more about telling a story, than telling a story about Neil Young.

While I was reading this book a friend emailed and said, did you know Neil Young is getting a divorce? I said, “No, but I am half way through the book and he is on his third wife.” The last half of the book he remained with the third wife (and remained married for thirty-six years). To Young’s credit he never speaks ill of his ex-wives or of marriage problems. He takes the high road, so to speak.

Cars, yes, there is a great deal in this book about cars (and dogs too). Each story centers around a car. The car the family drove to Florida. The car his father got before he left. Young has owned more cars than some towns have. The cars are different though than your typical rock star car collector. There is a Bentley and a few sports cars, but most are old and a bit eccentric: A Jeep pickup truck, an Eldorado Biarritz, plenty of old Buicks. Each car has its own personality some work and some don’t. Some he’s kept and others he sold quickly. Each one, however, has a story. There are watercolor paintings of the cars at the start of each chapter keeping with Youngs thinking of cars an art more than just transportation.

Throughout the book, when a car is mentioned, Young tells the reader the miles per gallon the car got and the number of pounds of CO2 the car released per mile or on an extended trip. Another point to respect about Young is he has become environmentally conscious. He has worked with bio fuels and electric cars, putting a great deal of his own money into the program.

Young is an excellent storyteller and it shows in his writing either in prose or song. Chapters are punctuated with lyrics he wrote at the time of the story. The use of lyrics in the writing helps explain the meaning. Sorry, no answer on who the Cinnamon Girl was. This is perhaps the best autobiography by a musician I have read. I am surprised say, it beats out Patti Smith’s Just Kids, and I really, really like Patti Smith. Young’s style and language communicate to the masses on a personal level. There is no “life of an artist” talk or name dropping. It is storytelling at it’s best. I am very impressed with Special Deluxe, even with the car talk.

2 responses to “Book Review: Special Deluxe: A Memoir of Life and Cars”