Book Review: A Time Such as There Never Was Before: Canada After the Great War 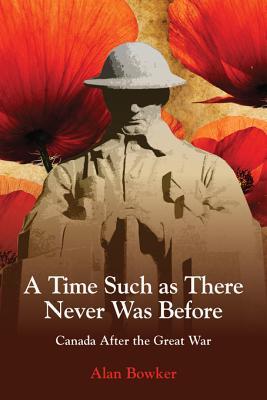 A Time Such as There Never Was Before: Canada After the Great War by Alan Bowker is a rich social and political history of Canada following the First World War. Bowker served for thirty-five years in the Canadian foreign service including the position of High Commissioner to Guyana and ambassador to Suriname. He holds a PhD in Canadian history from the University of Toronto and has taught at the Royal Military College.

A bit of a disclaimer on my part: I am a citizen of the United States and looking in from the outside at the country I grew up eighty miles from. I also hold an MA in International relations and find Canadian history something that was sorely lacking in my education. I would also like to thank Dundurn Press for their willingness to let a Yankee review so many of their publications and become a better informed neighbor.

To most Americans, Canada is like our quieter, better behaved brother on the world stage. They speak the same language, share the same common British heritage, and until recently shared the largest open border in the world. There are many similarities in our cultures and many parallels that give us a common ground. Bowker presents Canada’s history after WWI as a unique period of great change and untested waters. For both our countries, WWI brought our nations to adulthood despite our closeness there were different paths taken.

Canada lost more men in WWI than the United States and was involved in the war for a longer period. The war became a shock to the general population. No one expected the mass slaughter. Farmer’s sons volunteered never expecting to be gone for years. As a result, farming suffered in the agricultural giant Canada was becoming. America, only fifty years earlier, experienced its long bloody war and was hesitant to fight another. WWI was a wake up call to Canada and a chance for Canada as a nation to define itself outside the British shadow.

Many changes happened after the war. There was religious growth and change as evangelicalism rose and fell and atheism began emerge. Religious opinion was no longer in unanimous agreement that “khaki was a sacred color”. Race issues began to be more pronounced. Many non-French Canadians viewed Canada as English, many were English, and not open to foreigners. Slavs were not welcome, unless there was a need for farming experts. Immigrants from India were required to make a direct trip from India to Canada. There, however, were no direct trips. It was an indirect way of saying “You are not welcome.” Chinese were restricted. Blacks however avoided much of the persecution as Canada remained proud in its role as the terminus of the Underground Railroad.

The government began to feel opposition to the war in as the body counts rose. French Canadians were vocal in their opposition. The election of 1917 was bitter and rigged. At the end of the war Canada demanded representation at the table in Versailles, no longer content to being just a part of Britain.

The national government was faced with the problem of what to do with the returning veterans. Once the men came back they were demobilized. Discharges were processed at an unbelievable rate. The government worked through several programs appearing to try and do what was needed. An attempt to offer land to the returning soldiers to farm was one plan. There was not room in the workplace for returning soldiers. With the victory, 200,000 civilians employed in the munitions industry found themselves unemployed. There was no “Peace Dividend” for Canada. To compound matters the Spanish Flu devastated nations. Bowker notes that the life expectancy in United States dropped for 54 to 40 as a result of the Spanish Flu.

A Time Such as There Never Was Before condenses a great deal of history into a relatively few pages. The coverage of the interwar period is more Canadian history than most Americans will ever experience. Bowker provides detail with enthusiasm. The Information is written in a clear and stimulating fashion making the history a compelling read. The post WWI years were an exciting and sometimes trying time in Canada. Bowker does an outstanding job bringing this history to life. Highly recommended.

3 responses to “Book Review: A Time Such as There Never Was Before: Canada After the Great War”