Book Review: Grunt: A Pictorial Report on the US Infantry’s Gear and Life During the Vietnam War 1965-1975 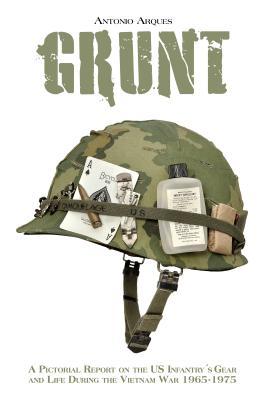 Grunt: A Pictorial Report on the US Infantry’s Gear and Life During the Vietnam War 1965-1975 by Antonio Arques is a coffee table sized book of the individual equipment of soldiers in Vietnam.

I spent the early and mid 1980s in the Marine Corps. Although well after the Vietnam War, I recognize a significant amount of the equipment and even carried some of it. From the steel pot liners, painted silver, that I wore in boot camp to the MX-99 90 degree flashlight I carried later on. Did anyone ever use the blue filter that came with the flashlight? Do any of the younger enlisted today know what a D cell is? I never realized how many personally purchased or locally purchased item were allowed to be worn. With the exception of Creighton shirts everything had to come from Cash Sales when I served.

Every aspect of a soldier’s personal gear is covered. There are a few Marine Corps items, but it is mostly army orientated. Everything from the white boxer shorts to the garrison cap is is included. Weapons, cold weather gear, smoke grenades, and the development of camouflage uniforms is shown. The book contains an incredible amount of pictures of personal gear many including the sewn in tags with the military designation for that piece of gear. The detail is exceptional and the descriptions add and explain the purpose and the changes made in the gear over a decade.

Arques takes the most mundane piece of gear and brings it to life with static pictures and some actual combat pictures. The changes in equipment over ten years was considered significant in many areas. Ten years after the war equipment, at least what I experienced, was relatively the same. Today looking back the changes are dramatic, but I still imagine troops carry the same sea bag (duffle bag). Grunt is a great piece of history for all and a great piece of nostalgia for many that served. An outstanding presentation of personal gear.