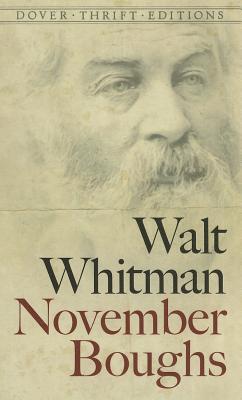 November Boughs by Walt Whitman was written when the poet was seventy years old. Many people’s minds become less focused with age and most creative people’s best days are long behind them. Whitman, however, is as sharp as he ever was in this collection. The collection starts with short poems that produce that same effect that Leaves of Grass gave me years ago. Even in the few lines of each poem there is enough enchantment to produce vivid imagery. It’s a bit more than just imagery when I read it. It is more like a movie that you fall into and before you realize two hours have past and you are left with a feel of wonderment.

Whitman is difficult to review mainly because his work is so difficult to dislike. There are plenty great writers who have their detractors, but I have never heard anyone say they hated Whitman. He does have some views African Americans that are very much less than positive, but he was a man of his time.

Some of the other views and thoughts of Whitman are found in the collection. The majority of the book is essays, thoughts on other poets, letters, and journal entries. Even here, Whitman’s style shines through:

The third day of mellow, delicious, sunshiny weather. I am writing this in the recesses of the old woods, my seat on a big pine log, my back against a tree. Journal entry for October 2nd.

November Boughs is an excellent collection. The short poems are easily read during a break in the day and will keep your mind well occupied after the reading. The other works, essays and journal entries give the reader a look into a great mind. A very well rounded collection on one of America’s greatest poets.