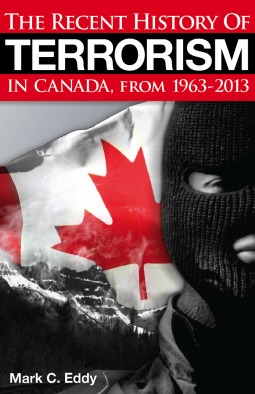 As an American reading this book several things come to mind. First, Canada is a very free country. Canadians enjoy the same freedoms that American do, but they are not, for the very large part, the victims of international terrorism like the United States. (Personal note to Americans. It is not our freedoms that the terrorists hate; it’s our foreign policy). Second, that Canada has a history of terrorism. I vaguely remember reading about the FLQ in history. Third, I support one of the “terrorist” groups and wear their patch on my messenger bag. I have no reason to support terrorism against the Canadian government, but I do support the Sea Shepard Conservation Society…not all their methods, but their goals. Sorry, Canada.

What is most interesting in Canada’s history is the near complete lack of foreign terrorism. Canada is a very close ally to the United States, but rather than an invasive foreign policy, Canada chooses peacekeeping missions. The bit of outside terrorism came from the Turkish and Armenian dispute, where Canada was a victim of location rather than policy.

Eddy makes a very clear point that Canada is a very free and open society. That eliminates most of the need to resort to terrorism. If you have a voice and support you can get your message out without violence. One comment the author asks a French Quebecer is why is there no more FLQ? The answer is a simple one. There is no need for it any more. The impact the FLQ made before falling out of favor was enough to change the situation in Quebec for the better.

Where does terrorism remain a problem? One area is eco-terrorism and monkey wrenching. I witnessed huge areas in British Columbia clear cut of all trees and it is a depressing sight. Apparently, some Canadians feel the same way. Another area as I mentioned above with the Sea Shepard is sealing. Eddy uses a figure of up to 400,000 seals are killed a year, many by clubbing. Their use is no longer feeding indigenous peoples, but fur for wealthy Europeans. It does not take watching too many Youtube videos of seals being clubbed and still live skinned seals to make one wonder “Who are the terrorists?”

Eddy presents a well documented, easy to read history. He also takes effort to describe terrorism from the legal standpoint and the practical standpoint. There is a section covering counter terrorism, a huge undertaking for a country with so much coast line and a formerly open border with the United States. For the most part, Canada remains fortunate that its policies and relationship with the US has not made it a target for International terrorism. Eddy makes an excellent summary of Canada’s policy in his conclusion:

Canada is not a violent place to live. It has one of the lowest homicide rates in the world, there is little civil disobedience or ethnic/racial conflict, and the nation does not practice capital punishment.

Canada is not a country that looks to create problems that give rise to terrorism. Although the author’s intent is to raise awareness of terrorism in Canada, perhaps it can also serve as guidance to others on how not to encourage would be terrorists.