“Cool dies when it becomes a fashion adjective.” 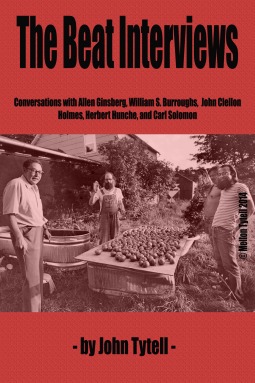 The Beat Interviews by John Tytell is a collection of interviews and commentary on leaders of the beat generation. The interviews conducted in the 1970s include Allen Ginsberg, William S Burroughs, Carl Solomon, Herbert Huncke, and John Clellon Holmes. The interviews seem for the most part to be unscripted and unprepared. The transcripts are not the type you read in a glossy magazine. These seem to be raw interviews and there are even a few spelling errors interviews (but not the commentary). In today’s media of heavily scripted interviews this is refreshing.

The tone and the answers of those being interviewed add to the overall content. Huncke, for example, forgets people’s last names and seems to struggle at times, losing his train of thought. Burrough’s comes across as being annoyed at the some of the questions and gives one word answers at times. You can almost hear Burroughs harsh voice give more than a few indignant retorts. Burroughs is also seen as the odd member of the group. Kerouac and Ginsberg, both from blue collar backgrounds, saw Burroughs as upper-class. John Clellon Holmes talks about Kerouac and his writing. Kerouac’s comment about writing fiction — or lies as Kerouac called it is explained. Kerouac’s relationship with other beat members is also discussed. Carl Solomon met Ginsberg at Greystone Park Psychiatric Hospital. Ginsberg was serving his sentence for his part in an automobile theft and Solomon for treatment. Solomon would have a role in with Ginsberg and Burroughs as his uncle was the owner of Ace Books. Ginsberg dedicated “Howl” to Solomon and included Solomon in the poem. Tytell does an outstanding job with Ginsberg and in the commentary goes into detail of Ginsberg’s last public reading of “Howl”.

The Beat Interviews are a person look inside some key members of the movement in their own words and in the words of their contemporaries — Neal Cassady and Jack Kerouac had already died at the time of the interviews. I enjoyed the unpolished style of the interviews; they seemed more honest. Although I only recently started reading any Kerouac, Burroughs, and Ginsberg, I can see the draw to Kerouac and Ginsberg. Burroughs give me difficulty, but in his time I believe he was more extreme and fitting than he is today. This is a great collection for beat fans and a personal look at, at the time, the surviving members.