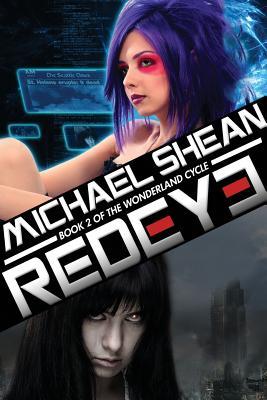 Redeye picks up shortly after Shadow of a Dead Star ends. We see the return of Bobbi (don’t call her Roberta) January running her business, a cyber cafe drop box of sorts. When responding to an alarm she discovers it is a coded message for her from one of Walken’s former colleagues at the Industrial Security Bureau. If the message was not strange enough, the agents presence and appearance was. Searching for the truth of what happened to Walken and seeking revenge on Genefex, takes Bobbi and her allies on an exciting, twisting, adventure. The story follows along at a rapid pace halting only when there is a new revelation or when doubts of honesty over their allies come to light. Along the way there are several alliances and trusts that are developed and some are founded only in self interest. A fast moving story with a complex mix of characters and motives make for an exciting read.

The story remains dark and in this volume more takes place outside the “civilized” area of Seattle. There is the cult like following of an anti-Genefex terrorist, Redeye. Bobbi and her allies meet the feral population up close and personal in this adventure. The characters are well defined and detailed. The technology is excellent and believable in the story. It is a mix of cyberpunk and science fiction. Everything ties in perfectly.

One of the problems of reviewing a book in a middle of the series is the fear of spoilers for those who did not read the first book. So, in order to keep the series intact I cannot give too much information although there is plenty more I want to say. Read Shadow of a Dead Star, then read Redeye. You will also want to talk quite a bit about this series. My typical sci-fi read is the traditional space story by Clarke, Bova, or Robinson or a typical dystopia. This series has taken me a whole level. An outstanding read.