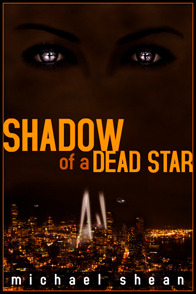 Shadow of a Dead Star by Michael Shean is a dark, near-futuristic, science fiction novel that takes place in Seattle in the year 2078. The world is is different. The European War has set the civilization back but let technology advance. Old cities are deserted, except for the roving gangs that are out to rob you for what you have, including body parts. Civilized portions are patrolled by private police forces and somewhat overseen by the Bureau of Industrial Security. Thomas Walken works for the Bureau. Walken a former cop was recruited based on his job and his abilities. He is the best at what he does. Private police carry out most of the day to day law enforcement for those important enough for protection while completely ignoring those who are not. The Bureau becomes involved in federal matters like Wonderland. Wonderland is technology of evil. For example, Walken becomes involved in a case involving very young girls who are cyber enhanced sex slaves. Walken like most people are disgusted by the practice and these particular sex slaves may be something even more sinister.

Shadow of a Dead Star is fast moving and very, very dark view of the future. The future is the worst case scenario. Humanity has fallen to the lowest common denominator. Technology, all though impressive, is also oppressive. There is no where to hide if someone is looking for you. Corporations for the most part run their bit of the world, and they are for the most part untouchable. Genefex, is perhaps the most powerful. The story evolves nicely from a crime investigation to something far bigger and far more devious than imagined. Walken turns to friends when the system turns against him. Luckily for him Roberta “Bobbi” January is his friend.

Shadow of a Dead Star is a book that will pull you in and not let you go. The reader will be pulled in by the characters, story, technology, or the depravity that humanity has become.Shadow of a Dead Star is perhaps one of the best science fiction novels I have read in quite some time. Fast paced, original, and very dark. I am looking forward to the sequel: Redeye