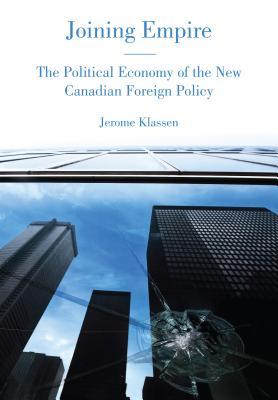 Joining Empire:The Political Economy of the New Canadian Foreign Policy edit by Jerome Klassen is a collection of essays discussing Canada’s foreign policy centering around the Afghan conflict. Klassen is a postdoctoral research fellow with the International Development Studies Program at Saint Mary’s University. Joining the Empire contains essays from experts in the field and journalists to provide a comprehensive look at how Canada became involved in the Afghan conflict and how it’s roles and views changed over a decade. The book also gives an outside look into American policy and motives.

Since the end of World War II Canada has allied itself more closely with the United States than with England. The economic ties with the US allowed Canada to focus its military in peacekeeping programs rather than defense. Canada fell under the United States’ protection umbrella. Without the need to grow a huge defensive force Canada was able to look inward to social and infrastructure development. After 9/11 Canada felt the need to intervene with the United States in Afghanistan. Canada fought for peace, development, women’s rights, and international security. After a decade and 150 dead and 1,500 wounded, Canada still had not realized those goals. Contributor, Angela Joya, writes, you cannot have peace and democracy under a military occupation. The war was unpopular and not without its own scandals. Canadian troops turned over suspected Taliban to the local governments where they were tortured.

Joining Empire also takes a critical look at US policy. It calls the invasion of Iraq an illegal war. Canada felt bound to intervene in Afghanistan, but took no part in the Coalition of the Willing in Iraq. In the 1970s a communist backed government took control of Afghanistan and with it came human rights including women’s rights and an end to under aged and arranged marriages. Women made up a large percentage of university students. Things were improving in Afghanistan. The US did not support the communist government and covertly opposed it. When the Soviets moved into Afghanistan to support the communist government the US supported the resistance movement arming some of the most vicious Islamic groups and leaders including Osama bin Laden. US oil interests in the Caspian Sea area created a need for a pipeline through Afghanistan to avoid placing it in Iran. Negotiations with the Taliban failed after 1998 attacks on US embassies by bin Laden. In early 2001 the US military was asked to draw up invasion plans for Afghanistan.

Joining Empire points out that US support for radical Islam in Afghanistan eventually came back to haunt the US; our allies became our enemies. In the same line of thinking the US claimed victory at the fall of communism as the USSR and the Eastern Block moved to market economies. China’s move to allow capitalism was also seen as a victory. However, these victories were short lived. The growth of consumer economies in the former second world has created a large demand for resources, competing with the US demand. Here again is a victory that creates problems twenty years in the future. Another example of US policy is the end of World War II. The Allies are victorious and impose strict military limitations on both Japan and Germany. While the US spends on a worldwide defense, Japan and Germany are allowed to concentrate on economic development and forego expensive military investment.

Canada refers to itself as a junior partner to the US almost as it was to England before WWII. It picks it battles based on its own interests. Canada joined the Afghan battle, but refused to fight in Iraq or join in on the missile defense shield. Canada moved with idealism to Afghanistan but recognized the reality of the situation and the objectives of its allies. Paul Martin’s government developed an enlightened foreign policy practice known as 3D: Development, Diplomacy, and Defense. Canada wants to occupy the moral high ground in its policy, but the reality of the situation often hinders the execution of those plans.

Joining Empire is a very well documented, scholarly look at Canada’s foreign policy and Canada’s intention to do the right thing. The book mentions that the terrorist did not hate America’s freedom. They hate America’s policies. Canada does not always do the right thing, but it does learn from its mistakes and the population is very skeptical of military involvement. The recognition of 150 deaths in Afghanistan (compared to the US with 15 times that number) has made Canada consider the cost of the war, in which none of their objectives were met. Many American’s will not agree with the book, but then many American’s had no idea Canada was fighting in Afghanistan or even had a full time military. It is refreshing to see America’s actions through the eyes of others. One must ask if our allies see us like this, how do other less friendly countries see America. Very well done book on international foreign policy.