Book Review: The Most Dangerous Book: The Battle for James Joyce’s Ulysses 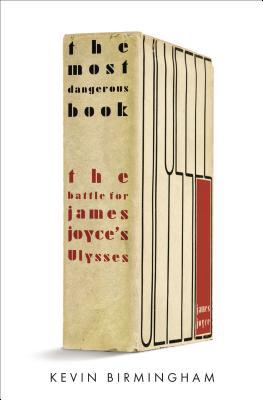 The Most Dangerous Book: The Battle for James Joyce’s Ulysses by Kevin Birmingham is the book about the book. Kevin Birmingham received his Ph.D. in English from Harvard, where he is a lecturer in History & Literature and an instructor in the university’s writing program.

I am old enough to remember the Larry Flynt obscenity trial and remember hearing it compared to “Howl”. At the time I figured Flynt must be doing something absolutely vile because, it was the bicentennial year and America stood for freedom. There had to be a very good reason for a book to be banned in America. Joyce more closely resembles Ginsberg than Flynt, but the idea of censorship and proclaiming books as obscene is unheard of in today’s America. Most young adults would be hard pressed to name a censored or banned book. Groups express outrage and burn books ranging from about Harry Potter to the Koran. Politicians expressed their outrage over the work of Robert Mapplethorpe and Karen Finley. However, you can buy just about any book or get any book you want. At the beginning of the twentieth century things were quite a bit different.

I read Ulysses prior to reading Birmingham’s history. I found myself chuckling at some of the cracks both about sex, bodily functions, and religion. However, most of the book was pretty much what was expected in a modernist novel. One hundred years makes a huge difference in what is considered obscene.

Joyce could not his book published. Publishers turned the book down. Virginia Woolf’s small press also rejected the book. Woolf did not like the book, but rejected it on the grounds that it was much too big of a project for her small press. The portions she read, according to several scholars, did influence her writing Mrs. Dalloway.

Ulysses did get published by a small bookstore in Paris run by the American Sylvia Beach exporting the book remained a problem. The surprising part was how America handled the book. The Comstock Act prevented any obscene material (and contraception information) to be sent through the postal system. Although today, the reader may not see the post office as a law enforcement agency, but at the time only the post office covered the entire country down to every street. There was no FBI at the time. The Sedition Act of 1917 gave the federal government power and forbade the use of “disloyal, profane, scurrilous, or abusive language” about the United States government, its flag, or its armed forces or that caused others to view the American government or its institutions with contempt. The Sedition Act stayed in effect until the end of 1920; two years after WWI ended.

The Most Dangerous Book not only describes the difficulty of getting Ulysses published, but brings all the participants in the effort: Joyce, his family, Comstock, The Little Review, Margaret Anderson, Ezra Pound, and players on both sides of the censorship issue in the United States. The book also gives an in-depth look at censorship in America, which is usually stifled in American history. This is an extremely well done book with extensive documentation. It is a history that covers more than the attempts to publish a book. Reading the novel, Ulysses, is not necessary before reading The Most Dangerous Book. Aspects of the novel are covered in the book. Very highly recommended to history readers and for fans of James Joyce. An outstanding read.