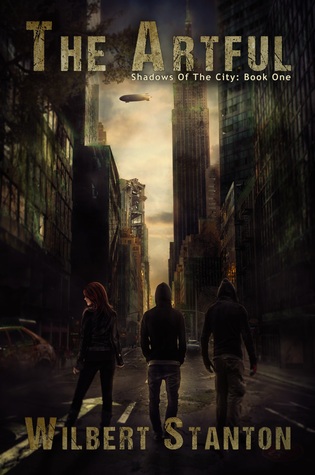 The Artful by Wilbert Stanton is a Young Adult novel that takes place in a quarantined New York City. A viral outbreak in 2025 has New York City isolated from the rest of the country. Inside the quarantined city different groups break down into factions, some very colorful. The Artful centers around Dodger and Twist two of the kids that make up the Gutter Punks. Their main mission in life is to appropriate medicine and supplies from the rich, hoarding, Tower Babies and bring it back to the masses of the poor.

Dodger and Twist end up in a bit more trouble than they expected in the latest acquisition medicine from the Empire State Building. Their latest attempt is botched and then is saved with the help of a former colleague Smith. Smith was on his own mission which draws the story together and turns the Gutter Rats into a threat rather than their usual annoyance. Running from security forces they save Gia from an attacker in a BMW. Security forces track down Dodger and Twist and demand what Smith has stolen. The boys have no idea where Smith is; their lives may depend on finding him.

Dodger is a smart ass, arrogant, but quite capable on the streets. Quick thinking, and never shy with his sly comments and wit. Twist, is a boy trying to prove itself. Younger than Dodger, he is the responsible one and a check on Dodger acting out his thoughts. He still is willing to take chances to prove himself as being something more than Dodger’s shadow. Gia is stubborn and has an attitude of her own. She is the strong, vocal, loner, but for her own reasons needs to be a member of the group.

A few thoughts I had while reading was that the story reminded of Escape From New York, The Warriors, and a bit of The Outsiders. There are some definite influences in the writing. The story is faced paced with interesting supporting characters. The different clans in the city were very well done and represented a variety of possible groupings, which brought my thoughts to back to The Warriors. It has been many years since Young Adult literature has appealed to me. The Artful reminded of those less hectic days and the reason I read in my younger days. A very well down story for all ages.

One response to “Book Review: The Artful”