“The spring and summer of 1914 were marked in Europe by an exceptional tranquility.”
Winston Churchill 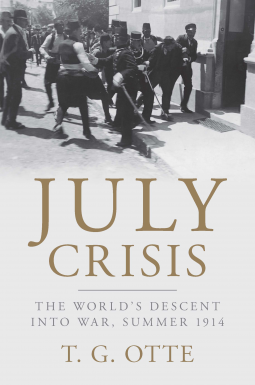 The July Crisis: The World’s descent into War, Summer 1914 by Thomas Otte is the history of the events leading to the First World War. Otte is a professor of diplomatic and international history of the 19th and 20th century at the University of East Anglia. He has written books on diplomatic history and China, as well as publishing numerous essays in academic journals. Earlier this year, I was fortunate enough to read and review Cambridge University Press’ Cambridge Honors the Centennial of World War I which featured an excerpt from this book. Otte takes a very detailed look at the events leading to the First World War. It starts with an unprecedented period of peace in Europe interrupted with an assassination in Serbia of the Archduke of a toothless Austrian-Hungarian Empire. The Emperor Franz Josef cut short his vacation on the news, only to continue it from his palace. He had little love for the archduke and his wife. The funeral was attended by immediate family, the officer corps was forbidden to salute the funeral train, and neither were buried in the imperial vault. The Emperor was not interested in war and was joined by the Prime Minister Tisza, however, Foreign Minister Berchtold and Chief of the Army Staff Conrad wanted an immediate and punitive war. No one in Europe wanted war except Austria-Hungary foreign minister and chief of staff. Although no one wanted war, there was a sense of paranoia between the nations’ militaries. Although no one want to go to war, I received the strong impression that no one really wanted to stop the war either. With each power in each alliance looking at its interests and security there was no consensus. The alliances were different from the alliances of the cold war. The Warsaw Pact and NATO were entangling alliances. The difference was that individual members did not act out on their own. East Germany would not have invaded West Germany on its own initiative or even mobilized its forces on its own initiative. Alliances were controlled (at least in theory) by the will of all member nations. The alliances of World War I acted to drag an ally nation into war rather than prevent it. No nation wanted to appear weak even though two were very weak at the time: Austria-Hungary and the Ottoman Empire. Russia was beginning to modernize and war was not what it needed. France had come to accept the loss of Alsace Lorraine. Germany was a growing industrial power with no need of a war. England sat outside the alliances and examined its own interests. War would be detrimental. If Germany won, England would have a new neighbor across the channel challenging its supremacy at sea. If Germany lost, France and Russia would be suspicious England’s motives. Although relations with Germany were growing, perhaps England made its decision earlier. The invasion of neutral Belgium is cited as England’s reason to enter the war. Although bound by treaty to protect Belgium, there was no requirement for military action. Diplomatic condemnation would have been sufficient under the treaty. Germany although in an alliance to defend Austria-Hungary in the event of a Russian or French invasion was under no obligation to make war against France or Russia if Austria-Hungary decided to start a regional war. It seems like history set up roadblocks to this war at every turn. Rather than stopping, countries ran through these roadblocks, not dead set on going to war, but almost a laziness to stop the war even with all the opportunities. World War I was a war that should not have been fought. There was opposition at every turn, yet despite the opposition, war came and change the world forever. Otte does an outstanding job of detailing the diplomatic and political road to war. Extensive use of footnotes and a wide selection of source, including primary source material make this the definitive study of the origins of World War I. The war was much more than an assassination and alliances. Otte takes the reader deep into the process that lead to war. A must read for diplomatic and political historians.