Book Review: Collisions of Empires: The War on the Eastern Front in 1914

It was what Austria wanted, a great and mighty nation surging over a small country, the ruin of Serbia which it pursued systematically by steel, fire, by pillage and incendiarism in towns and villages, and also by extermination, by the massacre of the Serbian people. 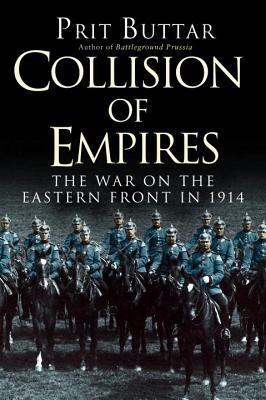 Collisions of Empires: The War on the Eastern Front in 1914by Prit Butar is history of the first year of World War I from the little talked about eastern front. Butar is a graduate of Oxford in medicine and served in the British Army as a doctor. He has written two other historical books and a novel. When asked about World War I most people with some history background will mention the the assassination of the Archduke in Serbia and Russia leaving the war. Almost everything else involves the the Western front: The German invasion, trench warfare, no man’s land, and the eventual German defeat. What is missing from most people’s understanding is that the country that started the war — Austria-Hungary, and the country that was the reason for the declaration of war — Serbia, are rarely mentioned after the assassination. Butar concentrates his effort or the Serbia, Russia, and Austria-Hungary (with the Germany concentrating its efforts to the west). If anyone was expecting a short war it was Austria-Hungary. It was dead-set on punishing Serbia regardless of what the rest of the Europe wanted. Austria-Hungary was the pit bull with it teeth permanently locked on Serbia’s neck. The pit bull, however, had no teeth. Of the nations involved on the Eastern Front, only Serbia fared better than expected in the opening of the war. One point that is mentioned Austria-Hungary itself. It claimed to be a great empire, but in reality it was not. It was two kingdoms with two different citizenships. Each was mostly independent in internal matters, but shared a common foreign and military policy. Austria-Hungary was made up of many nationalities with little common interest. Unlike Russia and the Ottoman Empire, Austria-Hungary had no single dominant ethnic group. It is difficult for a nation to rally around a flag when everyone has their own flag. The Habsburg Empire was essentially held together by memories of their glory days. If the Ottoman Empire was “The sick old man of Europe”, Austria-Hungary was not far behind. Collision of Empires is an excellent study on the mostly forgotten Eastern Front of World War I. Diplomacy, strategies, and the opening battles of the war are covered in this text. It is well researched and cited. This forgotten part of World War I is not only where the war started, but also the area most changed by the war. New countries were formed, empires fell, millions died, refugees crossed borders, and revolution began in Russia.Collision of Empires is a must read for any WWI historian or anyone with an interest in Eastern Europe and the Balkans.