Book Review: Those We Forgot: Recounting Australia’s Casualties of the First World War 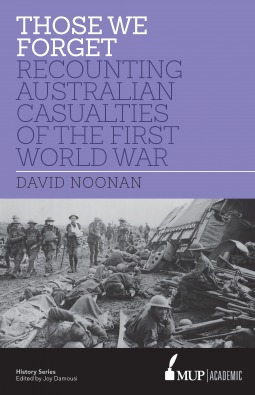 Those We Forgot: Recounting Australia’s Casualties of the First World War by David Noonan is a re-examination of Australia’s human loses in World War I. Noonan became interested in the war when he read over one hundred letters his grandfather wrote from the Western Front. He retraced his grandfather’s service in France and Belgium. That interest grew into a PhD in History and Philosophical Studies at the University of Melbourne. War is chaos and record keeping in chaos is not very accurate. Noonan examines the official numbers of Australia’s war dead and compares that to his research. Last year I read Steven Casey’s When Soldiers Fall which covered US losses from WWI to Afghanistan. There are very similar problems in both books. The biggest problems concern what is a casualty? There is no standard definition. Is it death, disabling injury, temporary injury, prisoner of war, illness, food poisoning, desertion, all of these, a combination of these? Noonan uses statistical methods to come to his results which are more accurate than the official records. The research finds some surprising information, such as venereal disease was a major problem in the AIF (Australian Imperial Force). Australian forces separated from home far away did not have the luxury of crossing the channel on leave to rejoin loved ones. Many who joined did not embark many were discharged for a variety of reasons before deploying. Shell shock was another matter. If it was recorded, it had to be evaluated whether is was physical or psychological or even real. It may seem strange that it might not be considered a combat injury, but remember that Gulf War Syndrome was questioned as being a real ailment. World War I also had the first stages of the Spanish Flu outbreak, various diseases from life in trenches. Suicides and deaths after the end of the conflict, but caused by the conflict are also studied and accounted for. Noonan uses samples and statistical data to complete a more accurate count of casualties. Although he is successful in giving a more accurate count not all the book is statistical data. He examines individual service files and provides a very good background into the medical and casualty reporting in the war. Although it is impossible to account for everyone, Noonan’s work goes a long way in accounting for many that were forgotten. Thank you to the Melbourne University Press for making book to readers and reviewers on this side of the Pacific.