Book Review: Cambridge Honors The Centennial of World War I: A Selection of Excerpts from Cambridge University Press 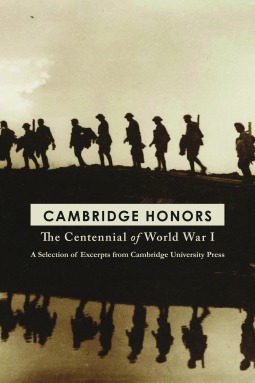 Cambridge Honors The Centennial of World War I: A Selection of Excerpts from Cambridge University Press by Thomas Otte, Jay Winter, Bruno Cabanes, and Santanu Das is a collection of summaries from other Cambridge books on the topic of World War I. Cambridge Honors looks at the war though other published works and covers it in themes that are mostly missed in other works. Thomas Otte’s excerpt is from July Crisis (a book I have for review from Cambridge University Press). Here coverage centers on Franz Ferdinand and Sophia’s trip to Sarajevo. It takes a look at The Black Hand and other groups actual intentions and plans before the assassination. It also covers the security of the event and gives a detailed account of the assassination attempts along the route the archduke traveled. Jay Winter presents an edited look at his collection: Cambridge History of the First World War (A three volume set I would love to add to my collection). The war is examined through the works of three generations of historians. He also brings to light aspect of the war not usually thought about. Such issues as infidelity on the home front as well as in the brothels off the front lines. There is a high percentage of married men fighting the war. One statistic states, of the Viennese men who died, 70% were married. The war produced many widows and in Germany unmarried mothers were allowed to change their title from fraulein to frau to free themselves and children of the stigma of illegitimacy. There is also an idea that men joined the war to leave family commitments — England, Canada, Australia, and New Zealand did not have conscription, but plenty of volunteers. One source of this idea is the cold letters home, but one soldier explains in a letter to his wife: No doubt all my letters must seem cold and formal but you will understand that every letter has to be censored by own officers [sic] and of course one cannot be too loving under the circumstances. other reasons could be the environment as noted by one soldier:We are walking on top of dead bodies, parapets have been made of cadavers on which we rest; and in front of the parapets, just as in the surrounding fields, there are piles of dead bodies. Bruno Cabanes in The Great War and The Origins of Humanitarians, 1918 — 1924 covers one of the major consequences of the war: refugees. After World War I, countries ceased to exist, and people had fled the war and were unable to return home. Of course there is the huge numbers of people fleeing the internal conflict in the Soviet Union. One point is made the German Jews, who had successfully integrated into german society, feared that Eastern European Jews would harm their status and opposed immigration. Cabanes makes a point I never really thought of before. Prior to 1924, the world was open to everyone. There were no passports. You boarded a train or boat and could go as you please. It was not until after the war that governments tightened down on travel and keeping track of “their people.” To help with the problem of refugees The High Commission of Refugees was established as an international organization. Fridtjof Nansen created a plan to create legal papers for paperless refugees, known as the Nansen Passport. To further complicate matters the Soviet Union, in 1921, denationalized thousands of former nationals, essentially leaving them without a country. The final section covers The Cambridge Companion of the Poetry of The First World War edited by Santanu Das is another book worth owning. There is a wide range of poetry from the trenches, to the family at home, and the intellectuals. The war, all wars for that matter, can be summed up by Charles Hamilton Sorley:When you see millions of the mouthless dead
Across your dreams in pale battalions go,
Say not soft things as other men have said,
That you’ll remember. For you need not so.
Give them not praise. For, deaf, how should they know
It is not curses heaped on each gashed head?
Nor tears. Their blind eyes see not your tears flow.
Nor honour. It is easy to be dead.
Say only this, “They are dead.” Then add thereto,
“Yet many a better one has died before.”
Then, scanning all the o’ercrowded mass, should you
Perceive one face that you loved heretofore,
It is a spook. None wears the face you knew.
Great death has made all his for evermore.World War I changed mankind forever. Cambridge does its usual excellent job of documenting history and the details that many leave out. If you cannot justify all the books in the collectionCambridge Honors The Centennial of World War I: A Selection of Excerpts from Cambridge University Press offers an excellent summary. The introduction covers what the war did and how it became the trailhead for the 20th century. Without World War I, Lenin would have been just another disgruntled refugee spouting political theory in a Zurich coffee shop. That, in itself, is something to think about.