“My conflict is that I am shy and yet I like to take up a lot of personal space.” Andy Warhol 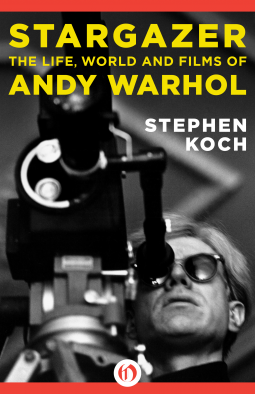 Stargazer: The Life, World, and Films of Andy Warhol by Stephen Koch is an examination of Warhol’s films. Koch has taught creative writing at Columbia and Princeton for nearly twenty years. His other works The Breaking Point: Hemingway, Dos Passos, and the Murder of José Robles and the extremely interesting sounding Double Lives: Spies and Writers in the Secret Soviet War of Ideas Against the West.Stargazer is unique because it concentrates on the films of Warhol rather than his other art. There is a brief introduction and explanation of how he was influenced by Duchamp. The assassination attempt by Valerie Solanas and his death experience are also covered. There is also mention of the most famous photograph of Warhol, exposing his scars to photographer Richard Avedon. A chapter is dedicated to the concept of Bohemia and the different layers of it. Koch also uses Lou Reed’s Walk on the Wildside to introduce some of the personalities in Warhol’s life. Reed, to the surprise of many used real names in the song. A little piece of information that I was unaware of was that Warhol was a habitual reader of books, and bought the movie rights to a Clockwork Orange because he thought it ought to make a good movie. His early black and white movies are covered in detail. An interesting bit of information on the films is that they were shot at 24 frames per second and played back at 16 frames a second to give it a barely slow motion feel. Several of his movies are covered in detail including Sleep, The Thirteen Most Beautiful Women, The Thirteen Most Beautiful Boys, Sleep, Empire, Haircut, and Blow Job from his silent period. Also covered in this period was his portrait making machine that used 100 feet of film to make a portrait of a person. The subjects varied from the famous to whom Warhol thought looked interesting at the moment. Stargazer is an interesting look at Warhol through his films and the events that surround his vision for the time and the evolution of his vision. Although a little light as a complete biography,Stargazer is the most comprehensive book I have read on Warhol films.