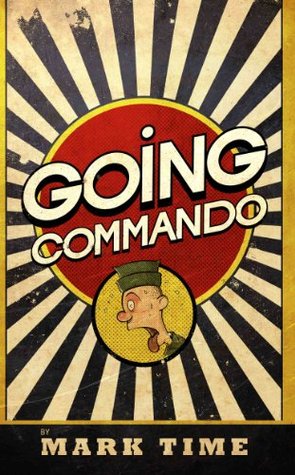 Going Commando by Mark Time is a memoir of one man’s time in one of the most respected military organizations in the world: The Royal Marines. Even as a United States Marine in boot camp, we learned that we were related to the Royal Marines. We are sort of younger brother following in the same footsteps. This book did bring back memories boot camp for me. Drill Instructors never ending pleasure of making one suffer, inspections after inspection, and the beat down of physical training, all came back to me, and of course some smiles.

I was also caught up, like Time, in doing something that I was told I couldn’t do. I waited until the end of high school before joining; Time was 16 when he joined. Likewise, we were both readers and loved maps. Time describes boot camp or Commando training which is essentially Marine Corps boot camp, Marine Combat training, and Advanced Infantry Training. I was also surprised that the Royal Marines used the USMC physical test as part of their training.

Time also brings back memories I have of combat boots with the plastic “cheese grater” inserts, yells of “Pain is weakness leaving your body” and “It doesn’t hurt once the pain is gone.” Marines are tight knit group on both sides of the Atlantic. In America the Marines have the lowest ratio of officers to enlisted men of any of the services. In the UK it goes a bit further. Royal Marine officers have no special academy and routinely are in the same classes as recruits. We both share that elite service aloofness. It seems that we both enjoy picking on our air forces and in the 1980s the Royal Marines stepped it up. One of the more popular t-shirts “You can turn a frog into a prince, but you can’t turn a prince into a Royal Marine.” commemorated Prince Edward washing out of Royal Marine training.

This book was a rare pleasure. It let me learn about the Royal Marine’s training and at the same time, remember my experiences. This book is a great read for those with military experience and even those with some interest in the military will enjoy this book. Time tells his story, and with some humor, about facing a very difficult task and succeeding — Blood, sweat, toil, and tears. One thing that that caught my attention is the author’s name: Mark Time. In Marine Corps close order drill, the command “Mark time, march” means marching in place. The term carries a meaning off the parade deck too. It means doing nothing or waiting, staying in one place. Clearly this Mark Time, was not making time in the Royal Marines. Semper Fi.