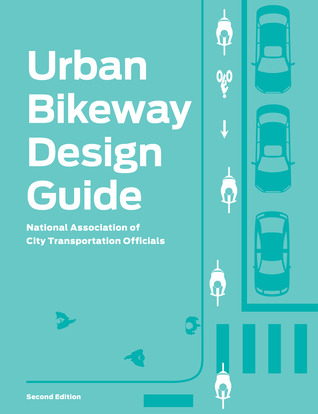 Urban Bikeway Design Guide, Second Edition by the National Association of City Traffic Officials is collected experience of the countries best bicycling cities. Here is a guide that looks at every conceivable design problem of making a city safe for cyclists.

I live in a north Dallas suburb whose city has a Trail System Planner. I am a full time cyclist and do not have a car or driver’s license. I complete all my daily tasks using my bicycle. I follow the laws of the road. We have bicycle route signs posted throughout the city. We also have a trail system through the greenstrips, but offer no protected crossing when faced with crossing six lanes of traffic. Where there are protected crossings you are faced with the impossible seven second crossing light. To complicate matters, we also have fairly lawless roads. Spandex clad cyclists run stop signs and red lights individually and in groups. Cars do the same. The police are rather apathetic. I was hit by a car running a stop sign in a school zone. The police officer told me I needed to be more responsible because active school zones are dangerous places to ride a bike. Wow! Police tend to blame the victim here.

Urban Bikeway Design Guide should in the possession of every city planner and city lawmaker. It shows proven methods on safely allowing bicycles in a city environment. Many people don’t ride their bicycles because they feel unsafe on the roads. They will load up their bikes in a car and drive somewhere to ride their bike. That defeats the whole purpose. Many people would ride to the store (a mile or two away) or the library, or work if they felt safe doing so. Urban Bikeway Design Guide provides non-intrusive solutions that work in other cities. From simple bike lanes, to more complex planning, this book does have the answers. It is frustrating to ride on a bike route and come upon a red light that will not change because the sensor will not recognize your presence, or when crossing in a crosswalk and getting hit by a vehicle making a right on red that didn’t bother looking left. One item repeatedly mentioned is keeping bike lanes clean and in good repair. In Texas the area near the curb (bike lane) is usually filled with debris: Broken glass, landscaping debris blown into the street, and sand from the ice storm two months ago.

By creating a safe environment for cycling, more people will ride their bikes. A person on a bike is one less person in a car competing for position and a parking place. The current manifestation of the cycling plan for my city is to keep cycling dangerous to discourage people from riding. Blaming the victim is the easy way out for cities. Not enforcing traffic laws, although not covered in this book, also keeps cycling dangerous. Here, cyclists are just as guilty as car drivers. Bicycle club rides take on a critical mass mentality; they ignore traffic laws they are required to follow, and cry foul whenever they believe their rights are being taken away. This book presents a starting point for cities to follow. Proven results and a variety of solutions offer a solution for almost any city.

I picked this book up earlier today with the intention glancing over it quickly and adding it to my “to read” pile. However, I was not able to put this book down. I could not stop thinking, “If only my city implemented some of this.” This is the definitive answer book.