Book Review: The Highlander: Rise of the Aztecs #1 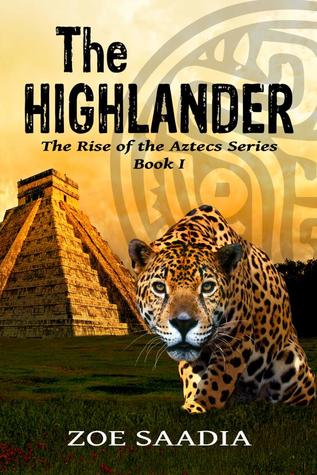 The Highlander: Rise of the Aztecs #1 by Zoe Saadia is the first in a series of early Mesoamerican historical fiction. Saadia has published a large collection of novels about the Central America’s indigenous peoples.

Most Americans have heard of the Aztecs, but know them mostly from the bloody sacrifices and “savage nature.” There has been quite a bit of embellishment in the Aztec stories that most people know. My knowledge comes mostly from undergraduate history courses where the history begins with the Spanish contact. The indigenous people are given a passing mention: Aztecs are warriors, Mayans had primitive science, and the Incas had the gold. There is much more to these people than that, and historical fiction is a great way learn and enjoy.

Historical fiction in the case of the Aztecs and surrounding city-states requires a bit of work on the author’s part. In American Civil War historical fiction, the characters need little development. We all have a good idea who Lincoln, Lee, Jackson, Grant, and Sherman are, and the mention of their name alone creates a ready made character in our minds. For Saadia, it is a bit more difficult as there are no readily recognizable figures from this time period and culture for the reader to instantly relate to. She has to create believable characters within the historical restrictions. The characters in The Highlanders are well developed and reflect the differences between the different groups that inhabit the area surrounding Lake Texcoco. The friction between different city states is reflected in the comments of the general public as well as the main characters. For a relatively small geographic region, there are very clear cut and deep feelings between neighboring peoples.

The politics of the region is a main source of information in the story. Alliances, tributes, enemies, and diplomacy all play an important role in this story. Although this may be the driving force of the plot, events are viewed mostly through the eyes of the two main characters: Kuini and Coyotl. Kuini, is a highlander living outside the main city states surrounding Lake Texcoco. He is the next in line to be the Warrior Leader. Although considered barbarians, Kuini is quite the artist. Coyotl is the son or the ruler of Texcoco. He comes from privilege and civilization. The two meet accidentally and develop a friendship even though they homelands are enemies. To tie things together Coyotl’s sister is introduced as a major character along with an Aztec warrior/emissary. The characters weave the story together with their mutual experiences and keep the plot moving and tied together.

The Highlander does historical fiction right. There is a plot that is true to history. The characters are well developed, likeable, and important to the story and the history. This is the kind of historical fiction that is educational and fun to read. It is not like read a history of Vietnam; It is more like having a veteran tell you his experiences in Vietnam. The Highlander has that same personal feel. More than reading history, you are experiencing history. Saadia is off to a great start with this book. Highly recommended.