Book Review: Rows of Memory:Journeys of a Migrant Sugar-Beet Worker 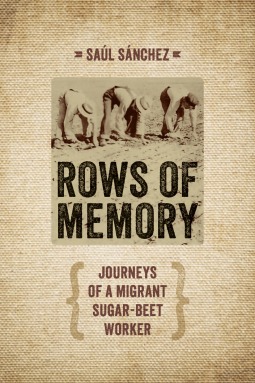 Rows of Memory:Journeys of a Migrant Sugar-Beet Worker is the memoir of Saul Sanchez, a boy who grew up as a migrant laborer in the 1950s and 1960s. He begins with journeys from Texas and moving north with the harvests. Rows of Memorycovers the author’s life from his grandparents until his graduation from college and leaving the fields.

Rows of Memory provides a unique look into life as a migrant worker. Sanchez provides a level headed telling of his life without the bitterness I expected. He worked for good people and bad people and isn’t hesitant to tell the reader. He gives a detailed account of the work that had to be done and the tools used. The short hoe in one hand to thin and weed and the other hand to push aside the sugar beet. I was a bit surprised to learn about sugar beet production in the US. I had known that it was a European and Russian crop. What I did not realize is that more than half of the US sugar production is from sugar beets.

Sanchez does tell the highs and lows of the life. Education is particularly difficult. Every year children had to leave school before the summer break to harvest and stayed out until well into the next school year. There were problems in non-segregated schools with race and also in poor segregated schools also. One segregated school was known as “The Camp.” The fun sounding name, however, came from the schools previous use as a Japanese internment camp.

Pay evolved too for the workers and not for the better. In fact, it started to spiral downward. In his early years he remembers the new cars some workers drove and having pocket money. In his later years he tells of returning his father’s car back to the dealership because he could not afford the payments. There are political struggles and political growth among the workers as they grow and become part of society.

Sanchez’s journey is not an easy one and it is also not an easy victory. Some of it is luck, but most of it is hard work. There is little doubt that he came from a hard working family and that has a very positive effect on him. His father is another important factor, in allowing Sanchez to attend college rather than work the fields. He does get some scoffs for saving his money for college from some family members.

Rows of Memory is a very well written look back on one man’s life who rose above his station and become a university professor. It is a balanced look and seems to be a very fair assessment of his life and the world about him. It is filled with both good and bad memories and good times and struggles. For every victory there are setbacks and at times great frustration and stress. Rows of Memory provides both a history of migrant workers in the US and a biography well worth reading. Omar Valerio-Jimenez provides a lengthy and informative introduction to the memoir.