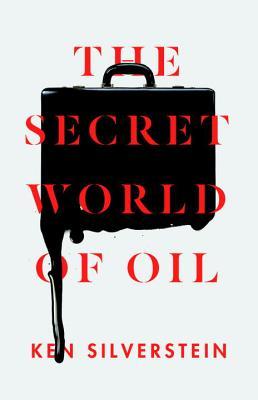 The Secret World of Oil by Ken Silverstein is an insider’s look into the oil industry. Silverstein is a fellow of the Edmond J Safra Center for Ethics at Harvard University. He received the Overseas Press Club Award as a co-writer of “The Politics of Petroleum.” He has also written for the Los Angeles Times, Mother Jones, Wallpaper, Washington Monthly, The Nation, Slate, and Salon.

Oil is that magical substance that you pump into your car as gasoline. You pay for that gas and the gas station gets its share, the oil company gets their share. The oil company then takes its money and pays for leases on foreign land and the crude oil extracted to the foreign government. That government then invests the money in education, infrastructure, and social programs. Everyone is happy and everyone’s life is improved by the magic of oil.

In the real world things are much different. There are Fixers, Traders, Gatekeepers, Lobbyists, corrupt third world leaders, and former first world politicians. Silverstein picks his people. Ely Cali as the Fixer who is the equivalent of a matchmaker. He knows the right people that the oil companies need to meet. Traders are represented by Glencore, previously run by Marc Rich (wanted by federal authorities until pardoned by Clinton in 1993), who buy and trade oil and other resources. Some conduct is illegal like buying Iranian oil and mixing it and reselling it because of the ban on buying and trading Iranian oil. The Gatekeeper is Bretton Sciaroni who now advises the Cambodian government. He previously served as Reagan’s chief consul on Intelligence Oversight Board although he had no legal experience. Sciaroni was dismissed after an embarrassing testimony in front of congress on Iran Contra. Now he controls access to the Cambodian government to companies after raw materials.

Louisiana, as a state, is used for the effectiveness of lobbyists. The rock star lifestyle of an oil “prince” is documented with the antics of Teodorin Obiang, the son of the Equatorial Guinea leader. Equatorial Guinea is the third largest producer of oil in Africa; 15% of the US oil imports are from Africa. Teodorin paying thirty million dollars, in cash, for his Malibu home is only the tip of the iceberg. First world politicians are represented by Tony Blair and Neil Bush. One thing in common in all these examples is corruption. Corruption is simply how business is done, and we buy it by the tankful.

Petroleum is too important to pay too much attention to how it gets to the pump. The Secret World of Oil goes into great depth in the few aspects of the oil industry that are chosen to be covered. To be fair, I believe this is a fairly accurate picture of the industry overall. There is, no doubt, instances of more and less corruption and greed, but this is a believable middle ground. I have never been a fan of big oil, in fact I don’t drive a car. I do know bicycle tires, chain lube, plastics, and a host of daily products are all made from oil, but I do my best to limit my usage. I feel, and this book reinforced, my belief that by using oil products I am supporting the corruption, greed, and suffering that this industry brings to the daily lives of many people.