Book Review: Train: Riding the Rails That Created the Modern World — From the Trans-Siberian to the Southwest Chief 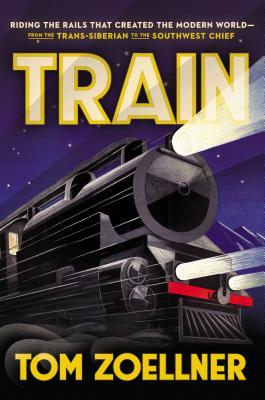 Train: Riding the Rails That Created the Modern World — From the Trans-Siberian to the Southwest Chief by Tom Zoellner is an account of the author’s travel on some of the historic rail lines from across the globe. Zoellner earned his B.A. in History and English from Lawrence University and his M.A. from Dartmouth. He has reported for several newspapers and has published several nonfiction books on a variety of subjects: from uranium to diamonds. He has also been a speechwriter for Gabrielle Giffords which prompted him to write A Safeway in Arizona: What the Gabrielle Giffords Shooting Tells Us About the Grand Canyon State and Life in America after the tragic shooting in 2011.

Train starts in England as Zoellner rides across the country visiting places of interest from the world’s first railway, to where the steam engine was invented, improved, and eventually made into a train. He ties aspects of the region, coal for example, from the dangerous work in the mines to Thatcher’s effective shutdown of coal mining when breaking the miners union in 1984. England is the heart of railroad history. Trains were needed to move raw materials to factories and finished goods back to port. In India, the railroads claim to be the biggest employer in the world, not true, but nonetheless and very impressive sized employer. The British brought railroads to India for their economic benefit, but in the long run the railways united the formerly fragmented Indian people and perhaps helped India on its way to independence.

Some countries see rail as the future. China’s centralized government is spending an incredible sum of money building a rail infrastructure. People will need to move in the future and a train is far more efficient energy-wise and far more affordable for the people than automobiles. Peru is in a financial do or die railroad project. Trains, although costing more initially, will move the country’s raw materials far more efficiently than an army of trucks. China is also exporting its rail building expertise throughout the world, including the United States.

I once heard a commentator say that the United States has a rail system that would embarrass Bulgaria; I don’t think he was lying. Zoellner covers the rise and tragic fall of the American rail system from settling the west and unifying the country to state governments refusing to allow high speed rail to be built in their states. As someone who prefers to travel by train, anywhere that is too far to bicycle to, I see the same sad system. Amtrak estimated that over 95% of Americans have never been on a train.

Perhaps the most unexpected thing in the book is the Tran-Siberian Railroad. Zoellner is quick to explain that this is not the Orient Express. In fact, when he tells Russian passengers that he plans to ride all the way to Vladivostok, they look at him in horror. Why would anyone want to travel voluntarily across Siberia is a mystery to a Russian. For days on end the landscape is unchanging. Russians ride the Trans-Siberian Railroad only because they have to. It is more of an engineering marvel for the Czar Nicholas II to brag about to his European counterparts than it was ever for comfortable train travel.

Train is an exciting look at some of the world’s historic and greatest railways. Zoellner adds history and ancillary stories to the these important railways. It is not just trains, but politics that create and kill railways. It is also about planning the future infrastructure of rising nations and watching the failure of up until now successful nations. Railways were and still are a sign of power and pride in many nations. Zoellner’s first hand accounts, interviews, and related history make this a great book.