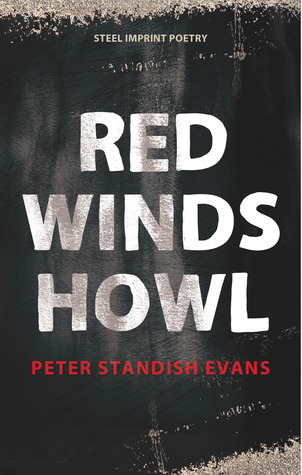 Red Winds Howl by Peter Standish Evans is a short collection of modern poetry. Evans was born in Worcester, UK. He earned his bachelor’s degree in English Literature from Natal University and his MBA from the University of Witwatersrand in Johannesburg, He has previously published the novel Omnibus: Borders: Coffee.

Over the last few years I have developed a strong appreciation for poetry– from the classic forms to free verse. I also came to find out that poetry has had its effects in my early musical preferences. My favorite singers were (and still are) poets: Jim Morrison, Patti Smith, and Bob Dylan. Red Wind Howls is advertised as something outside the mold of contemporary and historical poetry. It is described as a blend of 303 bullets and tequila, and from the “neo-metallic realist” school of poetry. I immediately thought this could be the punk rock of poetry: sharp, jagged edges, powerful, and raw. I would soon find that I was not disappointed.

I received the book in the mail and removing it from the envelope my first thoughts were “Huh, a used book. How long has this been sitting around on a back shelf.” It took me a minute to realized that this was not a used book. The cover art (something I usually never talk about) is distressed. It looks like something you would pick up on the California desert blown around for years by the Santa Anna winds (Red Winds of Philip Marlowe).

This collection covers a broad range of topics. From a machine gunner to a sniper and from Africa to a million, million pixels through the solitude of retinas, Evans looks beneath the veneer of our seamless world. There is a halting roughness to the words that breaks in mid thought to a new line or stanza. It gives the feeling that things are not necessarily the way we perceive them; we take things for granted and give no more than a moments notice. The Red Winds Howl is what exists beyond the sound bites and simple explanations. There is something disturbing, something the mad man sees and tries to explain to the conformist.

“Johnny’s Locker” is about a boxer who likes dancing with knives and breaking heads on Sundays, but Johnny is more than what people see he is a poet and runs deep, deep inside the wind. “The Extremist” tells of the view and patience of a vulture circling high above Mogadishu riding the thermals waiting for its moment. There is rebellion too. “Turning Faces” begins:

bursting
out of the mighty side streets sirens fly,
window mouthing obscenities
forced through loud hailers
firmly between thumb and Jupiter
decision and ambition fixated on the eye of the target
like a dart posed in flight
powered, pulsing, probing
endlessly racing, seeking victory
chasing the tail feathers down the alleys of time

Red Wind Howl is a very readable collection of poetry with a modern twist. Evans has captured the modern world with raw and powerful imagery. This is a collection for the modern urban man who sees the cracks in the foundation of modern society and is not afraid to express those thoughts. This is the punk rock of modern poetry.