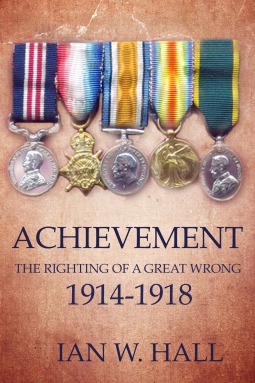 Achievement: Righting the Great Wrong 1914-1918 by Ian W. Hall gives a contemporary look back at the First World War in plain language. Hall was born in northern England in 1935 and served as a junior officer in the Royal Signals. After the military, he worked for thirty years in personnel management in the chemical, engineering, and construction industries. Since retiring, he has concentrated on writing.

Achievement presents a different history of the war from the British perspective. Instead of a chronological listing of events, Hall is topic driven. In “The Approach March” he takes us back in time to set the stage for the war: politically and militarily. Another chapter discusses army organization and the operations, and another the German perspective of the war.

In Achievement the overwhelming point was how unprepared everyone was for the war. Britain an island nation put its military spending into its navy. It needed to protect itself from European aggressions and protect its far flung empire. It did not have a real standing army in country. The author jokes that the British loved their army because it was overseas and not causing problems inside the country. Kaiser William (Willie as the author calls him) was doomed by buying into the idea of a naval arms race with Britain and the Schlieffen Plan. The naval race because it was planned on the idea that Britain would not react to the growing German navy, and the Schlieffen plan because no plan ever lasts beyond initial contact with the enemy.

There is some humor in the book like describing Russia’s value to France as an ally: Russia was a basket case nation in terminal decline; as an ally no more use than a busted flush to a blind poker player.

He also makes light of the Czarina’s military experience in her convincing the Czar to take charge of the military. In England, the King or Queen was in command of the navy and parliament in charge of the army. That explains why the army was so ill prepared equipment wise for the war . There was a point that each artillery gun was limited to firing four shells a day. British logistics also takes up an entire chapter in the book and gives an good look at its evolution. Meanwhile, the navy was all dressed up with no place to go in this war. Just as confusing to the outsider was that America’s military is lead by the president, but only congress can declare war.

One item that was repeated a few times in the book was one advantage the British soldiers had over the Germans: grenades. Although the German potato masher grenades looked cool, they were awkward. The British grenades, Mills bomb, were fairly close to a modern grenade. A steel shell filled with explosives. Once detonated, the steel shell became shrapnel and had a ten meter kill zone. What gave the British the extra advantage was the grenade was roughly ball shaped. Most British soldiers played cricket at one time or another and learned to throw a ball accurately (the same can be said of forces of the empire too). Throwing a grenade accurately was the same skill, unlike the Germans trying to throw a can with a stick attached to it.

In this year of the 100th anniversary of the start of World War I many books have been published and luckily I have been able to read a fair number of them. This book is different because it is the first that has not been written by someone with a PhD or even a master’s degree. The only education listed in the author’s short biography is grammar school. This is an educational and enjoyable book on World War I. The fresh perspective and plain language make it easy to read and understand. A good book for any war historian and an excellent book for the interested, non-historian.