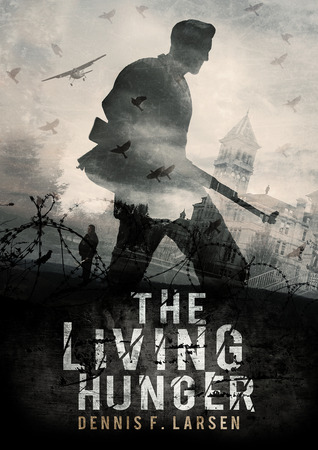 THE LIVING HUNGER Book Review
The Living Hunger by Dennis Larsen is a post apocalyptic novel. Larsen grew up in the shadow of Hill Air Force Base. He has worked as an optometrist for the past twenty-six years. This is his third novel.

The Living Hunger is a realistic post-apocalypse adventure, meaning no zombies which is a refreshing change of pace. War was worldwide and complete. Nuclear, biological, and chemical weapons were used. People now live in little pocket communities scraping together and trying to survive. Some people have not settled into communities and look to join or just continue on their way. Most communities are out for their survival and hope to peacefully exist with others. In Utah, one community in particular run by Don Bullock is out for more. He wants control and supplies and will stop at nothing to get them. Bullock has a professional killer in Solomon, an African who has been killing since he was a teen, and a group of soldiers who, for a rather gruesome reason, earned the title of “Harvesters”. The good guys are lead by army veteran Sergeant Farrell Jenson a veteran of the next Korean conflict, and he provides the leadership example for the people of Bear River High School community. Jenson’s brother Rodney, Mel Ghostkeeper their medic, Clayton and Cory, who provide some comic relief, and remains of the Allen family make up the core characters.

The effects of the war have caused problems for the survivors. One of the biggest problems they face is the future survival of mankind. There have been no live, or rather survivable births in the last three years. There is hope from a lab in Colorado that the aftereffects of the chemical and biological warfare might be cured. Now it becomes a matter of which side will get the cure and which side will prevail in the war for freedom or for power.

Larsen writes a believable story of a possible future war. The effects of the warfare seem plausible. Most readers will not have a problem with suspension of disbelief in the story. As a Marine veteran, I did find a detail or two caught my attention, but they either worked well in the story or were not important enough to effect the story. The characters work well together and are all very well developed. The reader may not like the character, but the reader will understand the character and the reason for his actions. The times are grim and there is no “off time”. If you let your guard down, you may not live to regret it. The survivors face real world problems and have real world setbacks. There are no Deus ex machina in this novel.

There are plenty of action novels on the market and most try to go over the top or create super human heroes to carry out the story. Here the people are all very human and all have their failings. Some actions may be seen as heroic, but nothing that is unbelievable. The story is well written and flows smoothly without any jumps in logic. The Living Hunger has all that you would expect in this type of novel. There is plenty of action, strategy, and twists. There is also the day to day dealings of the characters that help keep the story realistic and interesting. A very good read for fans of realistic post-apocalyptic novels.