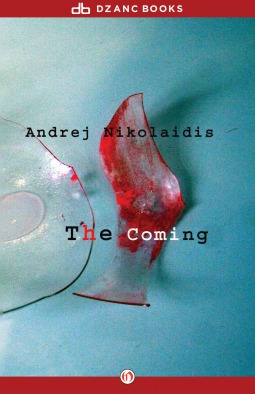 The Coming by Andrej Nikolaidis is a rather unique story about a detective, murder, books, history, and emails. Nikolaidis was born and raised in Bosnia/Herzegovina and moved to Ulcinj, the town the story is set in. He is also an outspoken supporter of Montenegrin Independence, human rights, and an anti-war activist.

The Coming begins as a detective novel but quickly spirals out of control into, well the end of the world. The narrator, also the detective, is an interesting character. His rented office has old movie posters on the wall to give his clients the right impression. Posters of The Maltese Falcon and Chinatown decorate the walls. His email address is also thebigsleep@yahoo.com. He explains his real work is all impressions. A cheating wife is a bitch; if she is not cheating, the husband is a swine for suspecting her. His work is summed up as:

My point is that a detective’s work isn’t so much about finding out the truth as inventing a story which people will accept as the truth. It’s not about discovering truth but discovering what truth is for those people.

The detective is called in to help find justice for a family that was brutally murdered. He spends quite a bit of time in traffic. Snow in June and changes in sea levels and email from his son, Emmanuel, are all relayed to the reader. We meet a butcher who works double shifts, seven days a week to support family. We are introduced to the history of the cabalist Zevi, the self proclaimed messiah of the Jewish people and radical Franciscan Fra Dolcino. Zeveti is said to have written three books. The last of these books was to remain hidden until Zevi’s return to earth; its title:The Coming. Here is a story that takes you on a ride in several different directions and just when you think you are permanently and hopeless lost, things converge and leave you a bit breathless after a mental roller coaster ride.

The Coming is a short book that takes time to read. It is much bigger than the number of pages would seem to make it. Once again Open Road Media finds a gem of a book that others have missed and releases it to the public. Open Road Media is the local bookshop of the twenty-first century. Surfing through their online collection is reminiscent of finding that “just right book” at the corner bookstore. The Coming shows that same original, non-cookie cutter fiction that makes reading an adventure.