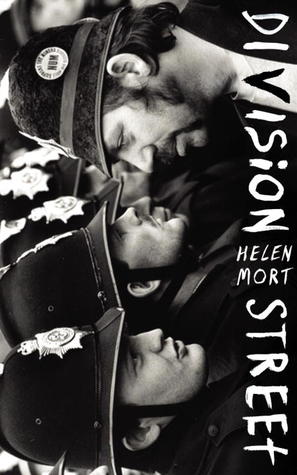 Division Street by Helen Mort is an incredible selection of poetry. The twenty-eight year old Mort is a five time winner of the Foyle Young Poets of the Year Award, poet-in-residence at the Wordsworth Trust, winner of the Eric Gregory Award in 2007, Manchester Young Writer Prize in 2008, Derbyshire Poet Laureate, and a PhD student at Sheffield University. She is short listed for the T.S. Eliot Prize and the Costa Poetry Award. She has earned a quite an impressive resume for someone who has not reached the age of thirty.

When I talk to other book people, one topic that comes up is who will be this century’s great writers? Who will be remembered as part of the twenty-first Century “Bloomsbury Group”? Who will define these early years for the rest of the century and beyond. There are plenty of writers and plenty of very talented writers. I have been lucky enough read and review some of their work. The internet and independent publishing has opened the world to many writers, more than any time in history, and yet I still wonder who will be remembered as the voice of these times. I am not sure who all the great names will be, but Helen Mort will be one of them.

I don’t think I have gotten totally caught up in a selection of poetry like Division Street since I read Leaves of Grass. The writing pulls you in completely and totally. You do not want to put the book down, and the hours will pass quickly and when you finally put the book down, you’ll need a few minutes, or longer, to come back down to your reality. These are poems in which you can truly lose yourself. The gritty urban environment is the state of nature for Mort’s work. There is not a beautiful pastoral setting. It was a brutal time when the coal miners went on a year long strike threatening to bring down the Thatcher government like they had the Heath government a decade before. There was violence and chaos and the entire British economy suffered. Thatcher won, but to this day that wound has not healed. This is a collection of man against government, the twenty-first century version of man against nature.

“Scab” manages to perfectly combine the violence of the strike with “We Three Kings” in a biblical saga of the strike. “Thinspiration Shots” take on the pro-anorexia web sites that promote anorexia as a lifestyle. There is also a gentler side to her work also “Deer” and “Night” reflect these feelings. “The Dogs” are about her own two canines. “End” is a cleverly written poem with a play on a “little death”. If you are going to read only one collection of poetry, read this one. It will hook you on poetry. For those who lament the direction contemporary writing is heading, read Division Street. It will renew your faith in contemporary writing.

This was 197th book I reviewed this year and probably the one that moved the deepest and the most. I sat for nearly half an hour after reading Division Street, just thinking “Wow!” Once I came down, I went and ordered Mort’s other collection Pint for the Ghosts. Yes, her writing is that good. This was the book that knocked me off my usual level headed, stoic mindset and moved me into an impassioned review.