Book Review: A Philosophy of Walking 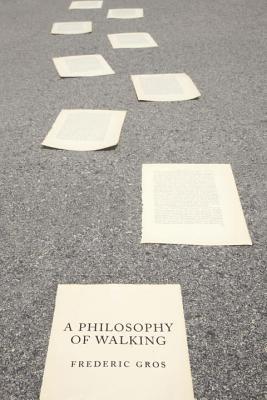 A Philosophy of Walking by Frederic Gros is an enlightening look into the most basic form of human transportation. Gros is a French philosopher who specializes in Michel Foucault. He is a professor of political philosophy at the University of Paris XII and the Institute of Political Studies of Paris.

Walking one of the simplest acts a person can complete. We depend on it and rarely think of it. Gros argues it is more than just a form of transport; it, in a way, defines us. Today, we think of walking simply as a means the takes us from one place to another. The start and the destination are the important parts. Walking is just a means to get to our ends.

American Indians walked barefoot so that they would stay in contact with the earth that nourishes everything including the walker through direct contact. Walking should connect the walker with nature. It is becoming one with your surroundings. Nietzsche walked for hours on end; it disconnected him from the world around him. His ideas came to him while walking, and walking was a type of mediation where ideas became clear and could be written later. It may not be surprising that Nietzsche’s insanity did not begin until he was unable to continue his walks. Thoreau was at one with nature and walked. Rousseau had to walk, and he walked all over Europe. “I was young, and in good health; I had sufficient money and abundant hopes; I traveled on foot and I traveled alone.” Rimbaud walked when he was poor and to escape. After he lost part of his leg he waited impatiently for his wooden prosthesis so he could resume his walking. Kant never walked far, but he walked everyday. For Kant, walking was cleansing. It was a break from the musty indoors of the library. It is said he walked the same loop in the park for years, only deviating from it twice. His path became known as the “Philosopher’s Walk.”

There are other reasons for walking. Pilgrimages are a reason for walking. Christian pilgrims went to to sites to give thanks to God. The sites were usually a great distance so the walk became a form of payment for good fortune. Pilgrims traveled simply. A walking stick, a pouch to hold documents and meager rations, a broad brimmed hat, and a large cape. The pouch was made of leather to remind the pilgrim of his mortality and the pouch was always open because the pilgrim was required to share. Other pilgrimages were for penance. A priest might assign a pilgrimage as penance for sins. The graver the sins the longer the pilgrimage. Here walking is still a connection with nature, but the church’s definition of nature.

Walking follows us into modern times. Gandhi walked with the masses for freedom. We can walk with purpose even in the cities. Rather than connecting with nature, it is a blocking of modern distraction to try and achieve that feeling of walking in nature. Walking in nature has become impractical for most of us today. Even in city parks we hear traffic, our cell phones, and many other modern distractions. We have lost the connection to earth that the Indians had. We have lost the ability to walk for hours completely alone in the wilderness. In modern suburbs, we have lost the ability to walk to the store or let out children walk to school because there are no longer sidewalks. Walking is something people do to get from their car in the parking lot to their desk at work or from their car to the grocery store. Something I remember from years ago: “We now have plenty of philosophy teachers, but no philosophers.” Perhaps we need to walk more.