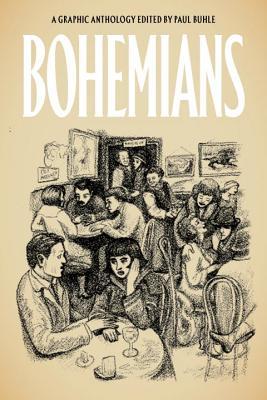 Bohemians edited by Paul Buhle is a history of bohemian lifestyle and the key players in a graphic novel form. Buhle earned his PhD from the University of Wisconsin-Madison in 1975. He has been involved in a variety of organizations like Students for a Democratic Society (anti-war), civil rights and the Socialist Labor Party. He was a founding member of the New Students for a Democratic Society and a leader in the Movement for a Democratic Society. He has written for many liberal and leftist publications. Before you let the editor’s background turn you off, would you really want to read a history of the bohemian movement written by Bill O’Reilly?

Bohemians covers the Unites States for a period from the utopia societies of the mid-nineteenth century through the Harvey Pekar and Robert Crumb. This graphic novel is more than a comic book. The artwork adds to the written word…more than adding it multiplies the information. The “free love” movement to the mid-nineteenth century begins the book. Yes, mid-nineteenth not mid-twentieth century. Walt Whitman’s “Crossing the Brooklyn Ferry” is presented with art merging 1850 New York with modern times. There are all the heavy hitters covering art, literature, dance, jazz, interracial couples, homosexuality, and labor. Beside Whitman, Oscar Wilde, Woody Guthrie, Josephine Baker, Henry Miller, and for people in my age group, Robert Crumb and Harvey Pekar. There are many lesser known people.

Bohemians is a nice collection of individual chapters covering different sections of history and different people. The graphic work is done by different artists in chapter so there is a variety of style to help in the transition of time. The history is interesting too. The people who are outside of society are paving the way the rest us us will follow. What was once cutting edge or just considered improper or immoral then, is accepted now. It is not acceptance of “bad” things, but women’s rights, civil rights, and of course art, dance, and music. Bohemians provides the reader with a good mix of education and entertainment.