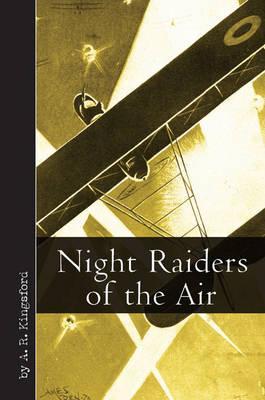 Night Raiders of the Air by A. R. Kingsford is the story of a New Zealander’s answer to the call of duty in World War I. Kinsford enlisted in the Medical Corps and survived the sinking of HMS Marquette in route to Europe. Eventually, he successfully transferred to the Royal Flying Corps and was assigned to the 100 Squadron as a lieutenant. 100 Squadron was the first squadron to drop a bomb on Germany and also the last.

War stories are best told by the people who were there giving first hand insight into the events and the human feelings that are recorded. We are usually appalled by senseless deaths, but the person there has seen it often enough that it doesn’t raise much concern above “he is no longer with us.” Witnessing the execution of a spy, however, was far more traumatic than battle field losses.

Kinsford flew the rather unique looking F.E.2B a pusher biplane bomber. He describes the flying, the learning, and the very frequent crashes. Crashing seems have been much more common than I have read in other histories and memoirs. There is frustration about not being able to reach the altitude to stop the Zeppelin bombers. Zeppelin and planes would fly over the airfield and town and literally drop bombs. Most were released over the side, by hand, without the benefit of bomb sites or calculations. Kingsford’s 100 Squadron would conduct night raids over Germany would be much more precise and at lower altitudes. Some missions went smoothly and other ran into the flood lights and anti-aircraft fire.

During the whole of its active service career on the Western Front, no less than two hundred and thirteen raids were carried out, with a total of one hundred and eighty-five tons of bombs dropped. Approximately 450,000 rounds of machine gun ammunition was expended during these raids.

Night Raiders gives a personal look at the airwar. Written a little more than ten years after the war, Kingsford had time to give an objective narrative of his experiences. It is more common to have second or third hand accounts of the war. When first hand accounts are given they are usually used for emphasis or even a bit of sensationalism. Here is a mature, first hand account of the war. The writing is clear and concise. Kinsford’s thoughts are well organized and very readable. It may just be me but there seems to be no hatred Kingsford. He does call the Germans, Huns. But things seem more sporting than vicious. World War I was a mistake. Nations that were warring were, with the exception of Austria and Serbia, really didn’t have a reason to fight. France was not seeking justice for is loss of Franco-Prussian War of 1870. Britain had more profitable things to do. The Kaiser was on vacation. Russia had its own internal problems to work out. Granted there was paranoia, but that could have been overcome. People went to war with a romantic idea in their heads and once it was seen not to be a quick little war they probably questioned who and why they were fighting. A very worthwhile read.