Aside
↓ Jump to Comments

You hear a lot of stores in twelve-step meetings—shocking narratives of brutal childhoods, shattered families, hard falls from grace, harrowing descents into degradation, desperate time spent in detox, emergency rooms, psychiatric units, and jail cells. After awhile you begin to think you’ve heard it all, that nothing will ever surprise you again about human behavior under the influence of drugs and alcohol, or about the human spirit’s ability to recover… 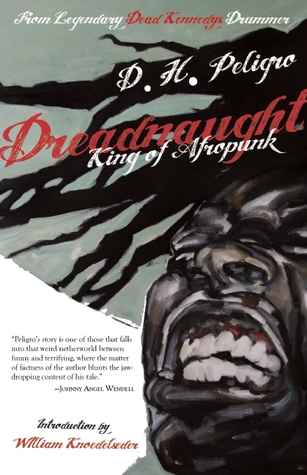 Dreadnaught: King of Afropunk by D.H. Peligro is the memoir of one of the very few African-American punk rockers to make it big. Peligro is from St. Louis and had a pretty hard childhood in the projects and ghettos. Thanks in part to mandatory busing, his musical preferences were much different than what would be expected: Metal, like Judas Priest. Peligro was the drummer for the Dead Kennedys from 1981 through the breakup in 1986 and since the 2001 Jello-less reunion. He also played for the Red Hot Chili Peppers in 1988.

Dreadnaught is your typical rock and roll memoir. Good times, bad, times, lots of drugs, and many failed chances to get straight. There is nothing new in that. What is new is finding out that the Dead Kennedys were not a drug band and found Peligro’s drug use problematic. The Red Hot Chili Peppers had is share of drug problems, but here again Peligro’s drug use caused problems. Flea although not a saint, as described by Peligro, did not abuse drugs and did not tolerate abuse. Insights into the bands made up some of the most interesting parts of the story.

Although this is your typical drug abuse memoir, Peligro is an interesting person. His rise from the ghetto, his taste in music, and the people he worked with is impressive. He mentions race growing up and the problems that caused, but he never used it as an excuse once he moved out to California. Peligro does mention a skin head yelling out to “send all the blacks back to Africa” before a concert. But Peligro plays it off as the skin head’s ignorance of the band. Few people knew the Dead Kennedys had a black drummer; there were never any pictures of the band members on the albums. If you would have asked me last week to name a black punk rock band member, I would have drawn a blank. (I have since seen the documentary on the band Death.) A few more bits of information on Peligro are that he is vegan/vegetarian, even when on hard drugs, and was once a bicycle messenger. Despite the typical plot, Peligro does tell an interesting story. Recommended for Dead Kennedys’ fans and fans of general rock memoirs.