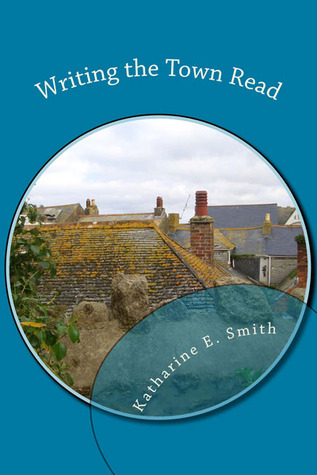 Writing the Town Read is written by Katharine E. Smith. Smith lives in Shropshire, England although she has fond holiday memories of Cornwall where the story takes place. She holds a degree in philosophy and has previously worked in the IT and charity sectors. She now runs a small publishing company.

July 7th, 2005 was the date of a terrorist attack in London fifty-two were killed by four suicide bombers in the London subway and a bus during morning rush hour. That is a true event and occurred the day after London was selected for the 2012 Olympics. Jamie Calder loses her boy friend in the chaos of the London bombings. She is a journalist at a small newspaper in Cornwall. Now, I was expecting a story about a small town journalist making it big with the story of what happened to her boy friend. This is something right my alley then I ran across this on the publisher’s page”

Writing the Town Read will appeal primarily to young women, in the 20 – 40 age group but, whilst not a great literary masterpiece, neither is it your average chick lit novel.” Book for young women, 20-40, and almost chic lit. Well that puts me at zero for three. So I guess Jamie is not going to be the groundbreaking investigative reporter. Well, manly man and all, I have read and enjoyed Virginia Woolf and the Bronte sisters maybe there is a hook in this story to catch me.

There was a hook for me very early on Jamie is a vegetarian, a quite outspoken vegetarian. I particularly liked the way she pointed out the hypocrisy of the local farmer cuddling up to a piglet for a photo op. She definitely has her mettle. She is almost instantly likeable. Not perfect, but her flaws are minor and help in making her likeable. She makes her opinions known, but sometimes it is with quiet sarcasm. In the face of the tragedies and challenges she experiences, she remains strong but not unbreakable; she is very human. She loses her boyfriend in the terrorist attack and finds out that death may not be the worst thing. There are also day to day issues she faces. The possibility of losing her job, friendships that are stressed, and dealing with co-workers are a few of her challenges. I don’t think I have been taken in by a female character like Jamie, since Dagny Taggart years ago.

Smith has a smooth and flowing writing style and creates very realistic characters. There were several times I had to remind myself that this is fiction and not a memoir. It reads that well. I didn’t find any of the little slips in the story or logical errors that occur in fiction. The story played out like real life. As an American I also liked the British English. There is nothing will confuse Americans in the book but, I found myself reading/hearing Jamie with a British accent. It seemed to add something extra for me. Sharp tongued sarcasm with a British accent just has so much more effect. Although I fail miserably as being part of the target audience, I really enjoyed this book and hope that Smith continues writing. She has a much bigger audience than the book was targeted for.