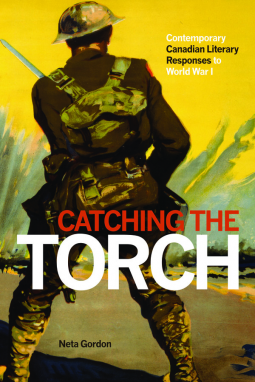 Catching the Torch: Contemporary Canadian Literary Response to World War I by Neta Gordon is a critical look at contemporary war literature. She earned a PhD from Queen’s University publishing a dissertation on Canadian women writing genealogical narratives. She currently chairs the Department of English Language and Literature at Brock University. Gordon is well published in both journals and books.

2014 will be the 100th anniversary of the start of the First World War. The war is all but forgotten in the United States. If it is mentioned at all, it’s by Marines celebrating their birthday (10 November) mentioning the battle at Bealleau Woods. In Canada and Australia the war is a much bigger part of their culture and heritage. Although becoming self governing and its own country in 1867, Canada was still part of the British Empire and when Britain declared war in 1914, Canada was pulled into the war. While the US and Europe viewed the war as the destruction of innocence one of the more romantic myths in popular culture is that Canada, as a nation, was born in the trenches of WWI. According to author Joseph Boyden, Canada was “an army to be reckoned with, no longer colonials.”

Gordon writes what can only be called a scholarly study of contemporary literature with WWI as the theme. In the US and Europe, WWI literature centers around loss such as T.S. Elliott’s “The Wasteland” or Hemingway’s A Farewell to Arms and finally to the extreme Johnny Got His Gun. By examining Canadian fiction at different periods after the war, she tracks notable changes. There seems to be several noticeable changes in the tone of writing war fiction. Early on there is a kind of romanticized, call to duty outlook, followed by the horrors of the war and assigning blame. The officer class takes a beating in some novels their poor leadership. With time, the war comes back and there is a redeeming value and then heroism is previous wars is used to call up new soldiers for next war.
Catching the torch refers the final stanza of Flanders’s Field :

Take up our quarrel with the foe:
To you from falling hands we throw
The torch

It has been many years since I read a critique of literature, maybe sophomore year in college. It was not a happy experience. Times changes and tastes mature and I can look at this critique with a better perspective. The book is very well researched and covers a range of Canadian literature. With the exception of “Flanders’s Field”, I am unfamiliar the literature used in the study, but the historian in me is adding new books to my reading list. I will re-read this book after reading the source novels. Gordon choice of source material supports thesis well. Canadians hate the horror of war, but the is a productive effect of war to national identity character. Views change to reflect what society wants to see. I imagine the horrors of the war will be replaced with respect for the fallen and pride in the nation next year. Canada lost 67,000 lives in WWI and twice that number were wounded. I can only be hoped that their sacrifice, no matter what the cause, will be remembered, especially today, Remembrance Day.