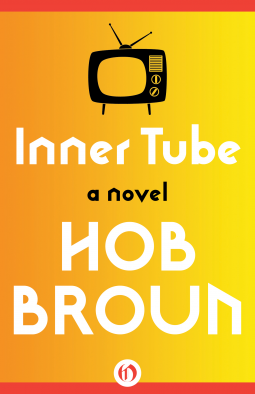 Inner Tube by Hob Broun was his second novel. Broun was born in Manhattan and a graduate of the Dalston school. He attended Reed College in Portland. After the publication of his first novel Odditorium he underwent surgery to remove a spinal tumor. The operation left him paralyzed from the neck down. Using a keyboard operated by expelling air he wrote Inner Tube and a collection of short stories. Twenty-five years ago this December he died at home when his respirator failed.

Inner Tube is listed a novel, but not so much in the traditional sense. I would put it somewhere between a novel and Naked Lunch. It is a series of short chapters all by an unidentified narrator. They tell a story, but not exactly in any special order. It seems more like a stream of consciousness that has been shuffled a bit.

What I like about the book is the incredible use of language. Some of the descriptions took me back. I knew exactly what meant and had a vivid image the television with the “wood cabinet and the golden speaker cloth.” I know this television. We had it in our living room in the 1970s. I remember the weave and the irregular thread of the cloth that made that cover. I even remember the Zenith logo affixed to the cloth. His mention of a small cactus spine that worked its way into his hand had me searching my hands. The spines that are so small and transparent that you cannot see them, but only feel the in it is irritation in a general area. I lived through that feeling much more often than I would have liked to. Other simple sentences bring a wealth of imagery: “The sunset, laced with hydrocarbons, was a deep purple.” or the more crude, “Breakfast cereal arrived in my duodenum like bark chips.” His longer sentences can also bring that imagery to almost art:

A boiling mass of ocean miniaturized, tightened in a square. Color-coded, like the iodopsin-secreting cone cells of the human retina, 900,000 phosphor dots twitch and fluoresce on the aluminized screen. And I watch, under siege. Electron guns, red, blue, and green, fire information particles, their inexhaustible ammunition, at 167 miles an hour. Weaponry controls and commands. So I watch.

Although the story seems a bit jumbled, I was intrigued by the short chapters and they all held my interest and obliged me to read on. Perhaps I was too caught up in the details to see the big picture. Nonetheless, I was mesmerized by the book. I have read some other reviews and yes, there is a story that can be followed. Perhaps it is like a painting where you are caught up in the shading, use of color, and perspective and forget the subject of the painting because it is just the means to showcase the true art. I am not usually one to rain praises on contemporary fiction as something that has potential to live on or as something that will still be considered great in twenty or fifty years, but I think Inner Tube will make that cut. Sometimes it nice not seeing the forest for the trees.