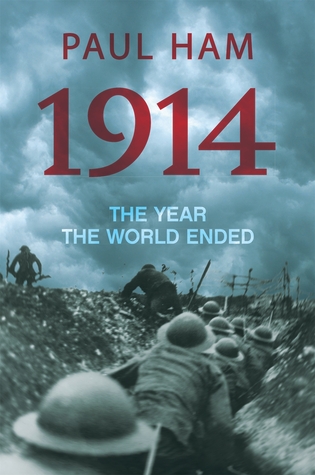 1914: The Year the World Ended by Paul Ham is a a lead up to the start of WWI. Ham earned his master’s in economics from the London School of Economics. He worked as business and investment journalist in London and later as the Australian correspondent to The London Sunday Times. Ham has since became a historian specializing in 20th century war, politics, and diplomacy. His other books have received critical acclaim in Australia and Britain. In 2014, his book Hiroshima Nagasaki will be published in the United States. 1914 will be released in Australia next year for the 100th year anniversary of World War I.

I am extremely happy to receive an advanced copy of this book. Australian publications for review are hard to come by in the United States and I am grateful for this one. World War I has always been a favorite historical topic of mine. It setup the world I grew up in. I am also thankful for the Australians who served and for the country that, unlike the US, still considers WWI an important event in its history.

1914 a very detailed history of the events leading to war. In every history I read, I pick up a few new pieces of information or see ideas expanded upon. A few of the many points brought out are will be covered in this review. Mobilization of troops was, in the past, considered nor necessarily a prelude to war but more so saber rattling. The years leading up to the war, that changed. By 1914 mobilization was considered an act of war. The change that made this happen was railroads. Railroads allowed for the rapid deployment of troops to neighboring counties’ borders. Mobilization now became an immediate threat. There was now no lag time from mobilization to invasion.

Alliances and neutrality played a major role in the war, as everyone who has taken a world history class already knows. It is not so much the alliances that caused the problem but the players. Germany takes the lion’s share of the blame for the war. The Kaiser did agree to support Austria-Hungary in the event of attack from Russia, but never thought Austria-Hungary would drag Germany into war. The Kaiser thought Serbia was humiliated in their reply to Austria-Hungary and thought the matter was settled with honor. He promptly went on vacation. Franz Josef reaction to the assassination is not what was expected. He did not allow his son to be buried in the family vault or invite foreign heads of state to the funeral. He was not interested in going to war, but others forced his hand.

The Ottoman Empire was called the Sick Old Man of Europe during the war, but Austria-Hungary was not far behind. Ham describes the Hapsburgs not as Emperors, but landlords. There was no real unity in the country: several languages, several nationalities with the only common thread being lines drawn on a map putting them all in the same country. There was nothing to rally behind. Evidence of this becomes clear in Austria-Hungary failed miserably in its attempt to subdue Serbia. In fact most of the war history concerns German aggression and the Western Front. The entire premise for the war, the retaliation for the assassination, all gets pushed aside in history.

1914 is an excellent political and diplomatic history of the events leading up the the war. Ham highlights some lesser known points and downplays others like the German naval build up. I received what I was looking for in this book a view of the lead up to the war from a source other than the American perspective. The book is well written and easy to follow. The documentation is outstanding taking up nearly a quarter of the book. This is an remarkable history and recommended to anyone who can get a copy.