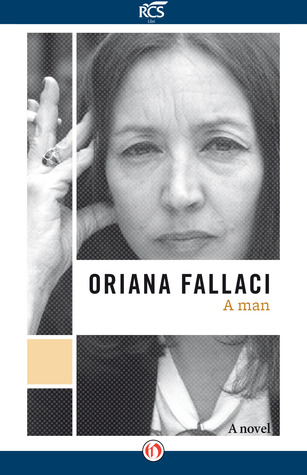 A Man by Oriana Fallaci is the fictionalized story of Alexandros Panagoulis’ political life. Fallaci had a long and colorful career. She was part of the anti-fascist resistance in WWII, a war correspondent in Vietnam, Indo-Pakistani War, the Middle East, and South America. She was also shot and left for dead in the 1968 Tlatelolco massacre. Fallaci has a long list of important interviews including: Kissinger, Khomeini (who she addressed as “Tyrant”), The Shah, Gaddafi, Arafat, Golda Meir, Walesa, Zulfikar Bhutto, and Giap. Her affair with Panagoulis is the inspiration for this book.

Fallaci was no stranger to controversy and a strict supporter of all antifascist movements; she is not shy about her positions or her words. Panagoulis was arrested in the attempted assassination of the Greek dictator Papadopoulos. Sentenced to death Panagoulis, is transferred to an island prison to await execution. Hour by hour, the execution is delayed until he is transferred several times only to find out that his sentence has been commuted to life. Panagoulis plays the role of hero and endures unbelievable treatment: small cell, no cot, hands remained cuffed for months. Yet at all times he remains defiant. He makes demands, knowing that the prison wardens can not allow him to die. International pressure has spared him from the firing squad and future harm. He escapes and is captured, attempts again and is foiled in the process. He refuses amnesty, but is released under a general amnesty. From then on, he tries to find his way through the new political system until his untimely death.

Normally I would not give out so much information even though it is mostly history, but Fallaci reveals most of the history quickly in the book. At the darkest moments for Panagoulis, she inserts future events like his election to parliament or mentions his death in the future. It is a very different writing style. She write most of the book in second person which initially seemed annoying but quickly grew on me. The first section which takes up the first third of the book cover’s Panagoulis’ assassination attempt, trial, and imprisonment. This is by far the part of the book. The story telling is outstanding and the character of Panagoulis extremely well developed and detailed. You feel for him in prison. He is a man that Camus developed in The Myth of Sisyphus — he laughs in the face of the absurd. Perhaps this very Camusesque portrayal is what pulled me into the book.

After the first section the book changes. Fallaci’s (and Panagoulis’) politics take over the book. Mistrust of the right and the left surface. America occupies a special place. A democracy, but one so powerful it does not have to respect the opinions and rights of other countries Allande’s Chile to make the point. Panagoulis visits the Soviet Union and sees that is fake. Conspiracies abound. Panagoulis sounds more like a paranoid than a politician on many occasions. Granted his years in prison and solitary did not help his mental health.

Since this book is written as fiction one is hard pressed to know what is real and what is propaganda. Even with a history degree, I knew little of modern Greek history. I knew the name Papadopoulos, but that was all, and I will admit to being surprised that a modern European county and NATO ally was ruled by a dictator. Papadopoulos was supported by the United States so his legitimacy may have been skipped over in my education.

I absolutely loved the first section of the book. It was inspiring and extremely well written. Although I feel second half of the book is not as developed as the first it is still a worthy read. Four star rating reflects a five star first half and a three star second half.