Book Review: Once You Break a Knuckle 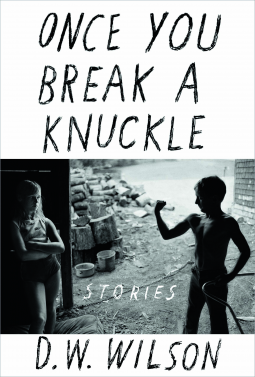 Once You Break a Knuckle: Stories by D.W. Wilson is a collection of short stories based out of British Columbia. Wilson was born and raised in small towns in British Columbia. He has earned his PhD in creative writing from the University of East Angilia in Norwhich. He has the novel Ballistics to his credit as well as being shortlisted for several awards as well as winning the BBC National Short Story Award for “The Dead Roads, a short story that appears in this collection.

Short stories tend to be difficult for me. When I read a story I like it to go on for a while and have the fundamentals of a story: Setting, characters, plot, climax, conclusion. Most collections of short story collections I have read seem to lack this and are a collection of disjointed stories that seem to have the same appeal of asking some on how was work today? There might be an interesting bit here or there but most of the time its pretty slow.

As I got a story or two into Once You Break a Knuckle, I found a theme. Intended or not, I thought if Bruce Springsteen wrote short stories, it would be like this. There’s a car (cobalt colored Camaro), several women, some regrets, the guy thing, and a story of a mathematician that really reminded me of parallel universe version of “Racing in the Street.” It is otherwise very blue collar and even includes a “State Trooper” (RCMP) and a wounded veteran coming home. Intermixed are some requiring themes of Kokanee beer, t-shirts and coffee mugs with corny but applicable sayings printed on them. It’s almost like Asbury Beach, NJ and Invermere, BC are sister cities.

This is a great collection of stories. The most of the stories interconnect and the standalones do not leave you hanging or feeling like you walked in to a middle of a conversation and left before it was over. The characters are well developed and at times it seems like you are reading a memoir rather than stories. Collections like this one restore my faith in short story collections. An excellent read for all.