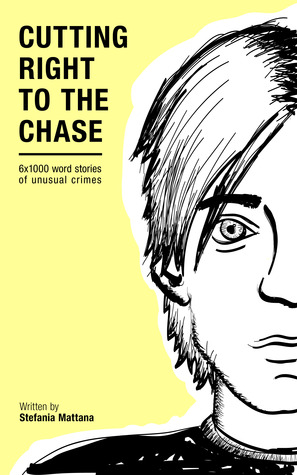 Cutting Right to the Chase: 6×1000 Word Stories of Unusual Crimes by Stefania Mattana is a refreshing crime chapbook. Mattana was born and raised in Italy and currently lives in London. She has a masters in sociology and uses it as a community planner. You can read her her other work on The Huffington Post UK and OnRugby.

One of the nice things about Twitter is the people you meet. The other day I got a message that Stefania Mattana was following me on Twitter. I looked at her profile and saw it was another writer so I gave her profile a quick glance through, expecting the next of many emo vampire or apocalyptic Christian novel writers. I was pleasantly surprised to see a young woman with a defiant look about her and a warning to be nice or you’ll wind up in her next he next crime novel. I was sold on giving one of her books a try.

I chose the first book of the short crime stories featuring former London Police Office Chase Williams. Williams, since leaving the police, has moved to Tursenia, Italy. His time is occupied assisting Inspector Alunni in a variety of minor, but unusual, crimes. Chase, seems like a good guy, maybe a little cocky, but he does solve the mysteries others can’t. I tried to place where I might know Chase from and it dawned on me. For those old enough to remember the Encyclopedia Brown mysteries, Chase may well be who Encyclopedia Brown grew up to be.

The stories are good and very complete considering the word limit. At risk of dating myself again, they were very reminiscent of the Two Minute Mysteries series of books I read as a young adult. After a brief exchange with the author I found out that the books were intended for adults but some readers and reviewers have attached the Young Adult label to the books. The author is not bothered by this and welcomes the larger audience.

I enjoyed the writing style. English is a second language for Mattana, but her writing is clear and unaffected by any language barrier. In fact, I very much enjoyed the writing style. The English was excellent, but it had something extra. The author’s Italian came out in more than just the setting and a passing phrase. The writing seems to hold an intriguing accent to the English language in a very positive way – Think of Sophia Loren speaking. Mattana can also turn a phrase. “…he only knew that Pollicino was married to a tall woman with a nose so sharp that you could cut glass with it… “

This was quite an enjoyable book and a very nice break in my steady diet of non-fiction. It is also nice to be able to pick up a book and know that you are able to finish the chapter even if you only have ten minutes. It is also nice in modern electronic world to find new authors on other continents and make the short trip to Amazon.com and pick up their latest book and have it delivered to your Kindle. There are a few more books in the Chase series and I am looking forward to reading them. Truly and enjoyable experience.

One response to “Book Review: Cutting Right to the Chase: 6×1000 Word Stories of Unusual Crimes”