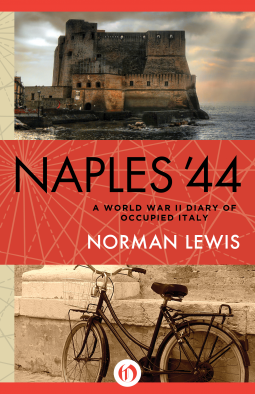 Naples ’44: A World War II Diary of Occupied Italy by Norman Lewis is his personal account of his experience in the British Intelligence Corps during WWII. Lewis was attached to an American unit in Naples after serving in North Africa. He and his colleagues were given little supervision and, for the most part, left to do their own tasks. He went on to write other books about French Indochina, Indonesia, India, Brazil and other countries. Lewis has also written fifteen novels.

There are at least a thousand books on World War II and plenty on the war in Italy. What makes this book different than most is that is a soldier’s journal. Taking that a step farther, it is a soldier who had a great deal of freedom in Italy and worked in the intelligence field. It is not a journal about battles; it is more a journal about interaction with the people of Naples. Freed of Mussolini, but still under the Germans, then Allied occupation the people suffered. A prisoner at court was asked if it meant anything that the Allies freed him and his people from fascism. The reply through the interpreter came back “ With respect, your honour, he says Americans or Germans, it’s all the same to him. We’ve been screwed by both of them.” The prisoner was released, because the judge thought he was insane. How could anyone in their right mind compare American liberators to fascists?

Food shortages are described. Fish served in restaurants often had a head of a desirable fish attached to the body of undesirable fish to ensure its sale. Another restaurant served “veal”, but when pressed the waiter admitted it was horse meat. Rabbit that was sold at the market had the head attached to ensure the customer that he or she was not buying cat. Shortages of the most basic food stuff, like olive oil, created a thriving black market.

A variety of dealings with the local population are covered. Initially cutting communications lines was thought to be enemy or sympathizer attacks against the allies. It turned out that they lines were being cut for the copper to sell on the black market. The people taking the copper thought nothing of it. They claimed it was German wire they were taking, not the Allies’ wire. Everything found its way to the black market from sugar to automobile tires, to blankets used to make clothing.

Lewis writes a personal look into a “liberated” Italy. He brings a part of war that many people do not know or think about. It is a common misconception that liberating a country brings peace and stability. It usually brings suffering and corruption/crime long before it brings meaningful change. Naples ’44 not only tells of war, but more importantly shows human nature in wartime. The behavior of both the Allies and the people of Naples are reported. Lewis does an outstanding job of documenting his experiences in Naples and provides a very worthwhile read. Recommended to those interested in WWII or the human experience in war and “liberation.”