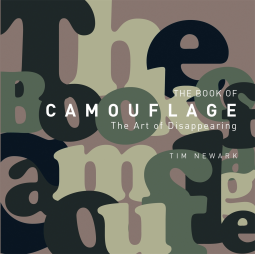 Book of Camouflage by Tim Newark is a short history of camouflage. Tim Newark was educated in the History of Art at University College in London and the Warburg Institute. His first book Medieval Warfare was published when he was still a student. Newark also served as editor for Military Illustrated from 1994 until 2011. He has written several books on uniforms and camouflage.

Camouflage is a a short book serving as an introduction to camouflage for the general public. Starting with ancient hunters trying to disguise themselves from their prey and the British dyeing white shirts in tea or curry to create a primitive khaki. The book contains some unusual facts like bright colors used to make the camouflage pattern because overhead (aircraft photos) where taken in black and white and color did not matter. Camouflage from practical to the near psychedelic “dazzle camouflage“ used on British ships are shown in the book. Every other page is is illustrated with examples of the previous pages text. There is a long history camouflage and almost an equally long history of the military rejecting it for a variety of mostly irrational reasons.

Newark provides what would be a unique coffee table book. The art and pictures are a excellent addition to the history. Although very short, only a hundred pages and half that illustrations, it does a excellent job of condensing a long history. One of Newark’s previous books is an eleven book collection on the history of military uniforms. Camouflage is a very good read and takes the reader through the history of something that anyone with an understanding of the military takes for granted today.